The ORX-013 Gundam Mk-V was a prototype general purpose mobile suit fielded by the New Desides in the Gundam photo-novel Gundam Sentinel and Gundam WARS II: Mission ZZ. It was piloted by Brave Cod [1]. There was also a custom unit designed for Amuro Ray [2].

A prototype mobile suit developed by the Augusta Newtype Research Institute as a refined version of the MRX-009 Psyco Gundam, the Gundam Mk-V was an immensely powerful unit. The project is initially commissioned by the Titans, however, the political situation shifts in favor of the AEUG during its development process, and then is taken over by the regular Federation Forces. Three prototype units are eventually completed, but as the Gryps Conflict comes to an end the Gundam Mk-V has yet to enter combat. Unlike the Psyco Gundam, the Gundam Mk-V can be operated by normal pilots who have not undergone Newtype enhancement, thanks to the revolutionary Quasi-psycommu system, which also allowed the pilot to control the wire-guided INCOM remote weapons stored in its backpack. The unit could also be fitted with a shield booster similar to the one used by the RX-121 Gundam TR-1 Hazel and its descendants, which can be attached to its back as an additional thruster. It was also very well armored, incredibly fast and maneuverable to the point of being detrimental to the health of the pilot, as Brave Cod discovered when he shattered most of his teeth during an emergency evasion maneuver.

The standard ranged armament of many mobile suits, the beam rifle fires a particle beam that can penetrate almost any armor that has not been treated with specific counter-measures.

E-Cap charged Beam Sabers are the standard close-range melee combat weapons employed by the majority of MS. They emit high-energy Minovsky particles to form a blade-shaped I-field (via manipulation of electromagnetic fields), and then fills this shell with superheated Minovsky particle plasma to produce an effective cutting blade.The Gundam Mk-V carries two 0.9 MW beam sabers stored on the backpack. Similar to the ZZ Gundam, the beam sabers also double as beam cannons, with power ratings of 12 MW.

Each INCOM remote weapon mounts a beam gun with a power rating of 4.5 MW. Because of limitations, the wires cannot supply enough power to allow the beam gun to be continually used. After a set number of shots, the INCOM must be recalled so that the beam gun can be recharged.

The Gundam Mk-V can equip two missile pods on each shoulder. Useful for mid-range combat, these missiles can destroy a MS or damage bigger targets.

The unit could also be fitted with a shield booster similar to the one used by the Gundam TR-1 Hazel, which can be attached to its back as an additional thruster. It is a further evolution of the sturm boosters (a device which contains thrusters for increasing propulsion purposes) used by earlier MS, but unlike its ancestors, it's retained as a shield even after its propellant is exhausted, rather than being discarded when empty.

When the New Desides staged their rebellion and took control of the former Zeon asteroid base Pezun, the Earth Federation sent a fleet to interdict them. One prototype Gundam Mk-V unit was placed in storage at the relay station Penta, and is subsequently reassigned to Admiral Brian Aeno’s fleet in order to help suppress the New Desides. When the Aeno fleet, lead by Admiral Brian Aeno, was sent to provide relief to Task Force Alpha they brought with them the awesomely powerful ORX-013 Gundam Mk-V (V being the roman numeral for "five"). However, on March 28, Universal Century 0088, the Aeno Fleet defected from the Earth Federation Forces and allied with the New Desides, and Aeno presented the Gundam Mk-V to New Desides leader Brave Cod as a gift to prove his loyalty.

The Gundam Mk-V would be piloted by Brave Cod during the lengthy battle for Ayers City on the dark side of Earth's moon. Cod dealt tremendous blows to the efforts of Task Force Alpha with the Gundam Mk-V, even destroying the entire three-man FA-010A FAZZ team single-handedly, as well as laying waste to many other units. However Brave Cod's skill and the Gundam Mk-V's power, as immense as they both were, would prove insufficient when he came up against the MSA-0011[Ext] Ex-S Gundam piloted by Ryou Roots. At first Brave Cod was able to completely dominate the unskilled and hot-headed Ryou Roots, dealing tremendous damage to the Ex-S Gundam, but sensing the unit was in danger the Ex-S Gundam's ALICE computer took over all piloting controls and destroyed the Gundam Mk-V. With Brave Cod dead Ayers City fell to the Earth Federation Forces, and the few remaining New Desides would retreat.

Two more prototypes were made. The first one is sent to Karaba and is assigned to the Legendary Pilot Amuro Ray, though there are no records indicating he actually sortied in the unit. Another one ended up in the possession of Axis Zeon, when a researcher defected from the Murasame Research Institute. Its external design, quasi-psycommu system, combined with combat data of Psycho Gundam Mk-II, produced the mass production unit AMX-014 Doven Wolf. Its real world design however was modeled after both of these units, and is retconned as such.

A Gundam Mk-V unit which is supposed to be assigned to legendary ace pilot Amuro Ray. Its head is more Gundam-like than the normal Mk-V, while its performance is the same as the original unit [2].

A Gundam Mk-V unit equipped with a experimental beam rifle for data collection. 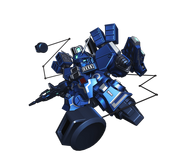 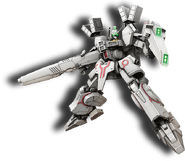 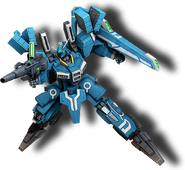 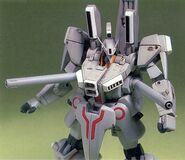 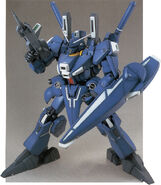 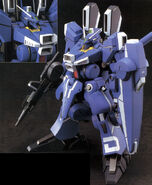 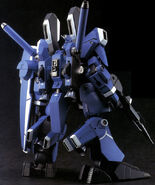 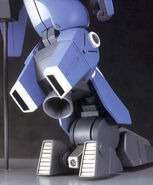 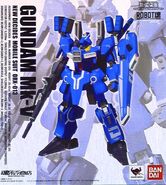 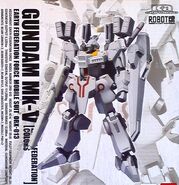 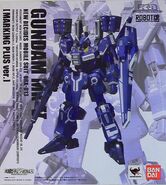 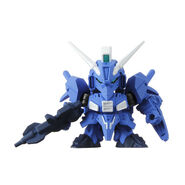 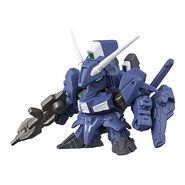