Using data from the MSF-007 Gundam Mk-III, The Gundam MK-IV was developed at the Augusta Research Institute under the supervision of Dr. Fujita as part of a backroom deal with Anaheim Electronics. It was an experimental mobile suit created by the Titans to counter the anti-Federation group Karaba. This machine was provided with a Quasi-psycommu system, a special system that allowed a non-Newtype pilot to execute ranged attacks through the use wire-guided incoms. Though this mobile suit was operated by the Titans, it did not feature the distinctive dark blue colors.

The standard close combat armament of most MS, the beam saber is powered by a rechargeable energy capacitor. It emits high-energy Minovsky particles to form a blade-shaped I-field (via manipulation of electromagnetic fields), and then fills this I-field shell with superheated Minovsky particle plasma to produce an effective cutting blade. The ORX-012 Gundam Mk-IV carries a beam saber stored on its backpack.

The standard ranged armament of many mobile suits, the beam rifle fires a particle beam that can penetrate any armor not treated with specific counter-measures.

A basic arm-mounted defense armament for many Federation mobile suits. The shield is a thick sheet of armor designed to take severe punishment that would normally destroy a mobile suit. Shields are also treated with an anti-beam coating to withstand several beam shots before the coating wears off. Typically physical shields can only take so much damage before they succumb to the pressure and break.

The INCOM remote weapon mounts a single beam gun. Because of limitations the wire cannot supply enough power to allow the beam gun to be continually used. After a set number of shots the INCOM must be recalled so that the beam gun can be recharged.

Originally planted for the Titans, this mobile suit never come to their hand because of the shift in favor for the AEUG. The concept of the Gundam Mk-IV would be developed further in the form of the ORX-013 Gundam Mk-V, which is the predecessor of Neo Zeon's mass product mobile suit, the AMX-014 Doven Wolf. 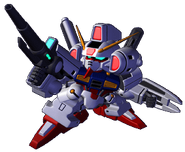 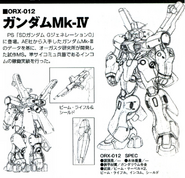 Retrieved from "https://gundam.fandom.com/wiki/ORX-012_Gundam_Mk-IV?oldid=451940"
Community content is available under CC-BY-SA unless otherwise noted.