The ORX-008 Gundam ［Gullinbursti］ is a mobile suit from the Advance of Zeta: The Traitor to Destiny light novel series. Its pilot is Yohn Juliana.

A mobile suit developed by the Oakland Newtype Lab for Cyber Newtype pilots, the Gundam ［Gullinbursti］ is the predecessor of the MSW-004 Gundam ［Kestrel］ before it was obtained by the AEUG. Two units were created, with Unit 1 being converted to to the Kestrel while Unit 2 was used as a test unit for mobile suit development in Granada. After the First Neo Zeon War, Unit 2 was deployed by the Salamis Kai-class Delphi and piloted by Yohn Juliana. The basic structure is the same as the Kestrel, but the design of the head and part of the exterior is different. Two wing binders are mounted on the back for attitude control, which were replaced by the beam saber rack on the Kestrel. The blade antennas on the shoulders and knees are antennas are designed to increase the sensitivity of the Sherman frame. These antennas were removed on the Kestrel to make room for the additional beam emitters. Instead of beam emitters mounted across the whole body like the Kestrel, the Gullinbursti only has two arm-mounted beam sabers that can double as beam guns. The Gullinbursti's core fighter is nicknamed "Piglet".

A beam saber emitter is mounted on each forearm. The beam sabers can also function as beam guns.

TA specialized high-power beam rifle was created for the Gullinbursti. While it is the mobile suit's only long-range armament, it is very powerful. Four E-pack cartridges can be stored on the Gullinbursti's waist, with two on each side.

Two Gullinbursti units exist and both of them fell to the hands of the AEUG after the Oakland Base is captured. Unit 1 was refurbished as the MSW-004 Gundam ［Kestrel］ after the Titans had already moved their forces to space, leaving behind the unit. Unit 1 was captured intact by the AEUG and continued with testing the prototype on board the Anaheim Electronics (AE) La Vie en Rose-class dock ship, Rosa Gigantia.

Unit 2 was operated as a test bed for the development of new machines in Granada. It was deployed shortly after the First Neo Zeon War to the Salamis Kai class Delphi with Yohn Juliana serving as its pilot. 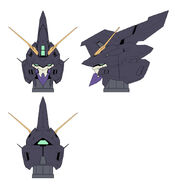 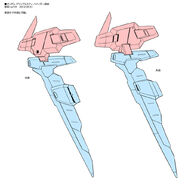 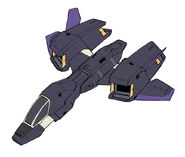 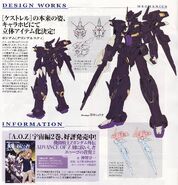