One problem with the standard ORX-005 Gaplant is the intense G-force produced by the movable shield binders, making Gaplant best used with a Newtype pilot. Due to this, when it was first produced, the ORX-005 Gaplant TR-5, it was instead mounted with booster shields used by TR-1 Hazel. Aside from this, a few changes were applied during the TR-5's initial service, such as applying an enhanced sensor unit and V-fin onto the head sensor, and replacing the main engines in the backpack with a thermonuclear hybrid jet-rocket engine, as with other machines of the TR series. For its main armament, the TR-5 carries a long blade rifle, which is mounted on the underside of the machine in mobile armor form.

Later on, near the end of Gryps conflict, the TR-5 Hrairoo is further refined as an Area Dominance Mobile Armor, similar in purpose to RX-78GP03 Gundam "Dendrobium", but for all three major environment (atmosphere, ground, space). The booster shields were changed back to the moveable shield binders. The side armor and back armor have additional thrusters and armor mounted onto it, greatly increasing its maneuverability and defense; the back waist armor also comes with a moveable hardpoint, allowing it to mount an additional manipulator arm. The front waist armor is also enhanced, and thus now has spray beam emitters for defense, as well as two hidden arms underneath. The long blade rifle is upgraded to be able to equip with 2 booster-type shields, which further increase its linear motions (standard booster shields), attack ability (micro missiles shields) or defense ability (spray beam shield).

Furthermore, it was mounted with Hrududu II shoulder units, each mounted on a hardpoint located on the inside of shoulder armor. On the right shoulder mounts a shoulder booster-claw units with beam emitters hidden in it, and can mount the long blade rifle to form a very powerful beam cannon; on the left is the generator unit. Due to the Hrududu II, which is based on the drum frames, Gaplant gain four more hard points in total, allowing it to mount additional manipulators arms (and by extension, wince shield units) and even Giant arms of Psyco Gundam, allowing it to execute all range attacks.

Mounted within the shield binders, has higher output than a standard beam rifle.

Stored within the sideskirts, standard equipment for melee combat.

Mounted between the legs of the unit. Has additional thrusters mounted around it.

A beam pistol with a long barrel attachment. The attached blade is a heat blade.

The Hrairoo is the intended core unit for the ORX-005 Gaplant TR-5 [Fiver]. 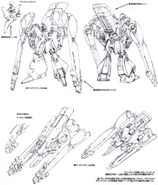 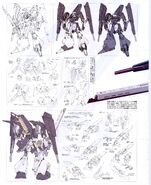 Retrieved from "https://gundam.fandom.com/wiki/ORX-005_Gaplant_TR-5_%EF%BC%BBHrairoo%EF%BC%BD?oldid=440334"
Community content is available under CC-BY-SA unless otherwise noted.