The ORX-005 Gaplant TR-5 is a prototype transformable mobile suit, it is featured in the novel Advance of Zeta: The Flag of Titans. The unit is piloted by Wes Murphy.

The ORX-005 Gaplant TR-5 is the transformable mobile armor which serves as the core unit of the ORX-005 Gaplant TR-5 [Fiver]. Although there are minor changes to some parts of the machine, it's basically the same as the standard version of the ORX-005 Gaplant. The biggest difference is that the characteristic movable shield binders attached to the Gaplant's arms have been replaced with shield boosters. Because of the intense G-forces produced by the high thrust of these movable shield boosters, the Gaplant became a machine exclusively for enhanced humans, and the Gaplant TR-5 has been equipped with the shield boosters tested by the Titans Test Team in order to reduce the stress on ordinary pilots. The transformation mechanisms are unaffected by the replacement of the binders, so it can use its mobile armor and mobile suit forms as the situation requires, just like the standard Gaplant. This makes the Gaplant TR-5 an excellent transformable mobile armor which still has ample fighting capabilities even when it purges the enhancement parts of the TR-5 [Fiver].

The mobile suit form of the Gaplant TR-5, which has a movable thruster unit on its back and a shield booster attached to each arm, has a layout very close to that of the Hazel's assault form. This is because the Hazel combat data accumulated by the Titans Test Team was used in the development of the Gaplant TR-5, and as a result the behavior and handling of this machine are remarkably similar to those of the Hazel. This is also the reason why Wes Murphy is able to freely control the Gaplant TR-5 the very first time he uses it in ground combat. Although the Gaplant is a high-performance machine developed for use by enhanced humans, the Gaplant TR-5 created using feedback from Hazel combat data could be considered almost a sibling to the Hazel.

In addition to the shield boosters on its arms, and the new sensor unit and V antennas on its head, modifications have also been made to the main engines in the backpack of the Gaplant TR-5. The engine unit has been replaced with a nuclear thermal jet/rocket engine similar to those used in other machines of the TR series. Unlike the standard Gaplant, the Gaplant TR-5 carries a hand weapon in the form of a long blade rifle, which is mounted on the underside of the machine in mobile armor form. The Gaplant TR-5 can be equipped with a winch shield based on the nose sensor unit of the FF-X29A G-Parts [Hrududu]. Once launched, the nose unit of this winch shield can be remote-controlled via wire guidance, using the same technology as the earlier Stutzer series. This device can be held in the hand of the Gaplant TR-5, or attached to the Hrududu in place of the standard nose unit, and it can support two shield boosters. 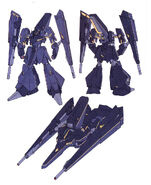 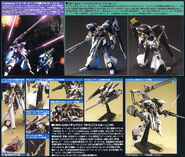