This transformable mobile weapon was developed by the Augusta and Oakland Research Institutes as a space-use mobile armor, but it also proved to be highly efficient in atmospheric flight. The Gaplant was one of the fastest and most agile mobile weapons when in mobile armor mode and thanks to its thruster-equipped movable shield binders, it was able to change direction easily.

However, because of the extreme G-forces which pressed on the pilot during high speed flight, the Gaplant could only be used by the physically toughest humans or by an enhanced Cyber Newtype. Another problem was its high fuel consumption. To compensate for this, the Gaplant can be equipped with a custom booster in MA form when it needed to fly longer distances.

The standard ranged armament of many mobile suits, the beam rifle fires a particle beam that can penetrate any armor not treated with specific counter-measures. The Gaplant is equipped with two beam rifles integrated into the arm-mounted movable shield binders, and they have higher output than most beam rifles of the day due to being powered directly by the machine's reactor.

The beam saber is a small device held in the mobile suit's hands when deployed and is powered by a rechargeable energy capacitor. It emits high-energy Minovsky particles to form a blade-shaped I-field (via manipulation of electromagnetic fields), and then fills this I-field shell with superheated Minovsky particle plasma to produce an effective cutting blade. The Gaplant is equipped with a pair of beam sabers stored in its side skirt armor, and they can only be used in MS mode.

Mounted on the arms, it is a composite equipment that can function as a beam rifle, shield and thruster unit. As these thruster equipped binders are movable, they allow the Gaplant to change direction during flight without needing to change the direction of its nose. The binders can function as shields as their surface are anti-beam coated.

While the thrusters allow the Gaplant to attain incredibly high acceleration, they consume fuel at a high rate. To compensate, the Gaplant can be equipped with a custom long-range booster in MA mode, which substantially increases the amount of fuel the Gaplant can carry, thus increasing its operational flight time. When the fuel is depleted, the booster can be ejected to decrease mass.

Two units were seen used by the Titans during the Gryps War. The first was piloted on Earth by Cyber Newtype Rosamia Badam, and was deployed against the AEUG following their assault on Jaburo, when she attacked the Audhumla. This unit was eventually defeated for good in the battle at the Golden Gate Bridge.

The second was used in space some time later by Titans pilot Yazan Gable. Following Operation Apollo, Yazan and his Gaplant battled against Kamille Bidan and his MSZ-006 Zeta Gundam during the Titans' attempted colony drop on the city of Von Braun. Yazan later used his Gaplant in a skirmish against Emma Sheen and her RX-178 Gundam Mk-II, and tricked her into destroying the bridge of the Alexandria, killing its captain Jamaican Daninghan. Yazan continued to use his Gaplant in several more battles, but eventually switched over to the RX-139 Hambrabi.

In U.C.105, a group of hijackers posing as members Mafty used this machine to board and hijack Haunzen Flight 356, in order to hold the Federation cabinet ministers for ransom.[1]

In U.C.0203, the remains of one Gaplant washed up on the shore of a southern island, where it was found by Afranche Char, who subsequently became determined to fight against the Federation. 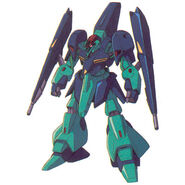 MS mode (Advance of Zeta: The Flag of Titans)

MA mode (Advance of Zeta: The Flag of Titans) 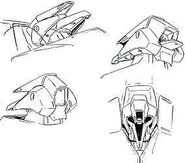 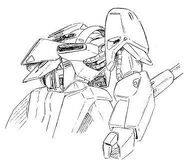 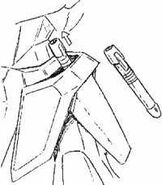 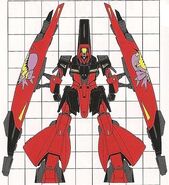 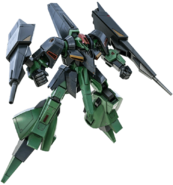 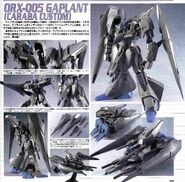