The ORX-005CS Gaplant Custom Elisia Special is a custom transformable mobile suit, it was featured in the manga École du Ciel as the personal MS of Ace pilot Erisia Nocton.

The ORX-005CS is a customized higher-spec version of the experimental ORX-005 Gaplant. The head unit was equipped with enhanced communication sensors which were feather-like in arrangement, and the entire machine had been painted purple along with ornate markings. The Gaplant Custom Elisia Special featured improved movable shield binders with increased firepower in the form of a right arm binder with built-in twin beam cannons and thrusters, and a left arm binder fitted with a large shield that incorporated vernier thrusters for defensive purposes. An interesting design feature of the ORX-005CS was the machine cannon and gatling gun built into the waist section, which would become a bow-mounted weapon in its mobile armor mode.

The standard close range armament for most Titans mobile suits, it is a small cylindrical device held in the mobile suit's hands when operated and is powered by a rechargeable energy capacitor. The beam saber is capable of cutting through any metal not been treated with anti-beam coating. The Gaplant Custom Erisia Special is equipped with a pair of beam sabers stored in its side skirt armor, and they can only be used in MS mode.

Replacing the Gaplant's beam rifles is a 2-barrel beam cannon. The particle beam fired from a beam cannon can penetrate almost any armor that has not been treated with specific counter-measures. Despite being a powerful weapon, its power is also a weakness as the Gaplant Custom Erisia Special's fusion reactor is unable to handle repeated usage of the beam cannon.

A machine cannon is built into the waist of the Gaplant Custom Erisia Special. It does not require energy to be used, however its effectiveness against heavy armor is very little. The gatling gun itself seems to have less firepower compare to a beam rifle, but the number of number of bullets it fires can shred through almost anything, regardless of how durable it is. It can be used in both MS and MA mode.

This 4-barrel gatling gun is mounted on the waist of the Gaplant Custom, and it can fire volleys of bullets at a high rate. Because of the gun's low caliber, it won't cause much damage to a mobile suit, but it is useful for keeping an enemy mobile suit from getting too close. It is also ideal for shooting down small, lightly armored targets such as missiles, attack vehicles, etc.

Instead the Optional Boosters of the Original Gaplant, the Gaplant Erisia Special is equipped with a Shield Booster on the left arm binder. This piece of equipment not just solved the Gaplant's fuel consumption problem, but also greatly increased the speed and agility of the Gaplant Custom Erisia Special. This is similar to what is used by the ORX-005 Gaplant TR-5.

A Gaplant was claimed by the Titans Test Team, and became the personal MS of ace pilot Erisia Nocton. Like the original unit, the Custom Erisia Special version was a high-performance mobile suit capable of both space and atmospheric combat, and several modifications have been made to the overall frame of the machine. The sensors, thrusters, and weapons was upgraded. Despite these modifications, the ORX-005CS's overall specifications were relatively comparable to that of a standard Gaplant. 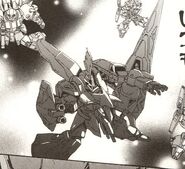 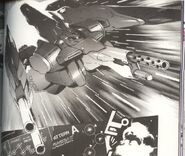