The Akatsuki Gundam was developed through the fusion of the knowledge that the Orb engineers had gained from studying the GAT-X105 Strike Gundam and its Striker Pack support system, with newer Orb-based prototype technologies. Its standard armaments include a twin beam saber, head-mounted CIWS, an arm-mounted shield, and a beam rifle. Its most remarkable feature is its gold-colored armor, known as the Yata-no-Kagami. Gold is the color reserved for Orb's ruling class, and this armor is actually a mirror surface armor capable of deflecting and even reflecting beam fire with help from the Akatsuki's sensors, making the mobile suit virtually impervious to beam shots. Despite this, its vulnerability to melee and physical weapons remained equal to that of any other mobile suit, hence the presence of a shield as part of its armaments.

The Akatsuki can also equip two optional backpacks, which are derived from the Strike Gundam's Striker Packs, to improve its combat abilities. On Earth, it can use an aerial backpack known as "Oowashi" Sky Pack, granting it atmospheric flight capabilities. Armed with two beam cannons, the Oowashi can separate from the mobile suit and transform into a support aircraft, similar to the ZGMF-X09A Justice Gundam's Fatum-00. With this pack on, the suit is known as Oowashi Akatsuki Gundam. When operating in space, the Akatsuki can use another backpack known as the "Shiranui" Space Pack, which increases the suit's mobility and equipped it with seven remote control beam turret units that have offensive and defensive capabilities. With this pack on, the suit is known as Shiranui Akatsuki Gundam.

The Akatsuki is equipped with a pair of head-mounted 12.5mm CIWS (Close-In Weapon System). The CIWS is a small-caliber shell firing weapon designed to intercept incoming missiles, projectiles, and lightly armored vehicles.

The Akatsuki is equipped with a "Hyakurai" Beam Rifle as its primary ranged weapon, it has an excellent rate of fire and is stored on the right side armor when not in use. The rifle also has a slot below its barrel for equipping the Experimental Twin Beam Saber, turning it into a gun-sword.

The Akatsuki is equipped with an Experimental Twin Beam Saber for close combat and it is stored on the left side armor when not in use. The Twin Beam Saber can detach into two individual beam sabers when required. It can also be mounted to the bottom of the "Hyakurai" Beam Rifle, turning the latter into a gun-sword.

For added protection, the Akatsuki can mount an experimental shield on its left forearm or carry it in hand. It has the same anti-beam reflective coating as on the suit's body and is capable of deflecting or reflecting large beam blasts, including from the Positron Blaster Cannon. Unlike the armor on the suit's body, the shield is also strong enough to withstand physical attacks, such as missiles and other projectile weapons, and is mainly used for this purpose.

Mounted at the bottom of the "Oowashi" Sky Pack, the pair of High-Energy Beam Cannons is the Oowashi Akatsuki Gundam's strongest ranged weaponry. They are positioned under the shoulders when in use, and can extend to reveal a handle each on the bottom side. However, holding this handle is not required for firing the cannons.

The seven remote weapons mounted on the "Shiranui" Space Pack, they are comparable to the first generation DRAGOON System. Each unit mounts a single beam cannon, which can also function as a beam shield emitter when used together with the other two beam shield emitters at the side. By using these emitters on all the seven remote weapon units, a large beam shield can be created to provide protection for about one to two battleships.

Attached to the back, it is an optional backpack unit for atmospheric flight. The Oowashi is equipped with four jet engines and two rocket boosters, allowing the Akatsuki to fly at subsonic speeds. Like the ZGMF-X09A Justice Gundam's Fatum-00, the Oowashi can detach from the mobile suit and change into an unmanned aircraft to support Akatsuki in battle. In this scenario, it can either function independently due to its AI system or be remote-controlled by the Akatsuki's pilot.

Attached to the back, it is an optional backpack unit for space combat. Besides boosting the suit's mobility due to the added thrusters, it is also equipped with the DRAGOON system in the form of seven M531R guided mobile beam turret systems. The Akatsuki can use these remote weapons for either increased firepower or defensive capabilities.

The Akatsuki utilizes a customized version of the General Unilateral Neuro-link Dispersive Autonomic Maneuver Operating System - the same operating system used on the "GAT-X" series - created by Kira Yamato. This system was devised to make Natural pilots combat-proficient in using a mobile suit, allowing them to be on par against Coordinator pilots.

The Akatsuki's golden armor (including those on its armaments and backpacks) is a mirror surface armor composed of nano-scale beam-diffracting lattice layers and ultra-fine critical plasma suppression layers. It not only protects against incoming beams by deflecting the beam fire, but can also use the Akatsuki's sensors to track enemies and automatically redirect these beams back at them, thus combining offense and defense. This armor also allows Akatsuki to block a Positron Blaster Cannon blast and gives it the ability to penetrate specific beam shields or beam reflectors, such as the Requiem's Positron reflector. However, the armor provides no protection against melee attacks such as direct strikes from beam sabers or beam boomerang. Additionally, its manufacturing and maintenance costs are enormous. The amount spent on equipping one mobile suit with this armor is said to be equal to producing more than 20 MBF-M1 M1 Astrays.

The Akatsuki was originally intended to be the standard mobile suit for the Orb national defense force. However, due to the development difficulties and high cost caused by the anti-beam reflection system, the Akatsuki had a protracted development and the project was frozen after the basic mobile suit was completed. As a result, it was not ready during the First Battle of Orb. However, despite the freeze on its development, its weapon system continued to be developed in secret in anticipation of its possible use in the future. The single prototype's existence remained a secret as per Uzumi Nara Athha's orders, only to be used as the nation's last line of defense, or if Cagalli is in dire need of additional power (though according to his voice-recorded will, Uzumi hoped that the day that the mobile suit's hangar will be opened would never come).

The completed Akatsuki Gundam was first piloted by Cagalli Yula Athha. Using the Oowashi pack, she piloted this mobile suit to defend Orb against a ZAFT attack during the Second Alliance-PLANT War, after being informed of its existence by Ledonir Kisaka. Cagalli assumed command of the Orb military, and used the Akatsuki Gundam to try and defend Orb against ZAFT's forces, but was soon confronted by ZAFT's top ace, ZGMF-X42S Destiny Gundam pilot Shinn Asuka.[1] While Shinn's ranged beam attacks are ineffective, he easily outperformed her by using melee attacks, causing minor damage to the gold mobile suit.[2] When the battle headed to space, the Akatsuki Gundam was repaired and with Cagalli's orders, she lent it to Mu La Flaga, while Cagalli remained behind in Orb to take charge of her country.[3]

While the Archangel was docked at the lunar city of Copernicus, Mu La Flaga used the Akatsuki Gundam with "Oowashi" Sky Pack to intervene in the defense of several crew members while they were trying to rescue Meer Campbell. Despite Akatsuki Gundam's presence, Meer was killed by a bullet intended for Lacus Clyne.[4]

The Akatsuki Gundam, with "Shiranui" Space Pack, played a major role in ending the Second Alliance-PLANT War by defending the Archangel and the Eternal, as well as aiding in the destruction of the Requiem superweapon.[5] 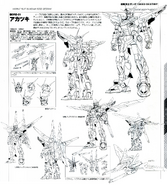 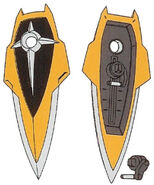 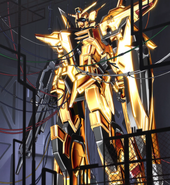 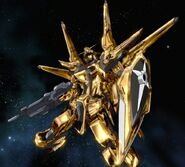 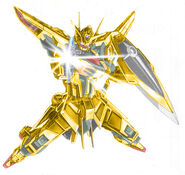 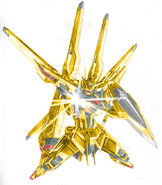 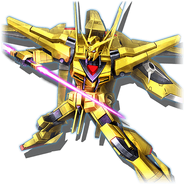 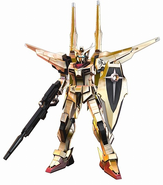 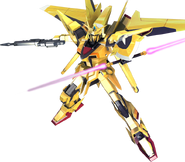 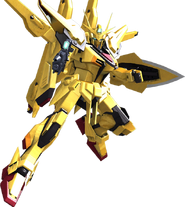 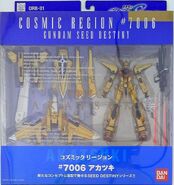