Based on the data of the YMS-15 Gyan, the RF Gyan is the rarest of the RF series of mobile suits used by Mars Zeon. Like the original Gyan, the RF Gyan's design focuses on melee combat, and is not equipped with any ranged weapons. Because of its high performance, it is expensive to manufacture and is limited to senior commanders or ace pilots.

A close-range weapon installed in the right arm of the RF Gyan. This retractable cable delivers a high-voltage electrical shock when it comes into contact with an enemy mobile suit, damaging its internal systems and stunning its pilot. The heat rod could also be superheated to give it cutting properties.

The beam saber is the primary melee weapon of the RF Gyan. It has a high output and is specialized for piercing/stabbing attack rather than cutting.

A piece of equipment that increases the RF Gyan's defensive capability, it is typically mounted on the left forearm. 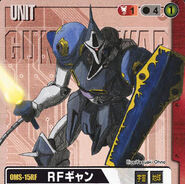 Retrieved from "https://gundam.fandom.com/wiki/OMS-15RF_RF_Gyan?oldid=500218"
Community content is available under CC-BY-SA unless otherwise noted.