The OMS-07RF RF Gouf is a mobile suit used by the Mars Zeon in the video game Mobile Suit Gundam F91: Formula Report 0122.

Built by the Mars Zeon faction stationed on Mars, the RF Gouf resembled the old MS-07 Gouf series of mobile suits. However, it had a redesigned internal structure featuring modern parts and designs. This in turn allowed the RF Gouf to have a performance on par with modern mobile suits. While it is designed primarily for ground combat, it can also be operated in space.

These shell firing weapons have a high-rate of fire, but little power and are generally ineffective against mobile suits; however, they can damage lightly armored areas such as the sensors. They are ideal for shooting down small, lightly armored targets such as missiles, small vehicles, etc. The RF Gouf mounts four vulcan guns in its head.

A close-range weapon installed in the right forearm of the RF Gouf. This retractable cable can generate a beam at the tip.

The RF Gouf's regular left manipulator is replaced by a five-barrel 75mm machine gun shaped like enlarged fingers. It fires physical rounds at a rapid rate, and despite its bulky and awkward appearance, its barrels demonstrate limited degree of digital dexterity allowing the ability to adequately grip the beam sword.

The RF Gouf's main close combat weapon, the power of the beam sword is significantly higher than that of ordinary beam sabers.

The standard ranged armament of many mobile suits is the beam rifle, it fires a particle beam that can penetrate almost any armor that has not been treated with specific counter-measures.

The beam bazooka utilizes the technology of a beam rifle on a slightly larger scale. The beam bazooka fires slower moving mega particles, causing its beam to widen and allowing the beam to cause damage over a greater area, ideal for dealing with battleships or catching multiple mobile suits off-guard.

In U.C. 0122, Mars Zeon attempted to invade the Earth Sphere, using the RF Gouf as a specialized ground combat suit. Although it was more powerful than its predecessor, the MS-07B Gouf, it was still larger in size than the miniaturized RGM-109 Heavygun and F71 G-Cannon mobile suits that the Earth Federation Forces were deploying to replace the aging RGM-89 Jegan. 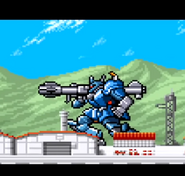