OMNI Enforcer (Oppose Militancy and Neutralize Invasion Enforcer) is the military force of the Earth Alliance in the Cosmic Era, and commonly referred to as the Earth Alliance Forces. Unlike ZAFT, the OMNI Enforcer is organized based on a traditional model. Many top officers of OMNI Enforcer, mostly those from the Atlantic Federation (which dominates the Alliance after the disastrous Battle of JOSH-A) are also members of the Blue Cosmos anti-Coordinator group.

OMNI Enforcer's space fleet is large and well-equipped, though their warships are slightly outdated compared to ZAFT's fleet. Their mobile weapons until the Battle of Porta Panama are primarily limited to the TS-MA2 Moebius mobile armor, a distinctly outdated design. Five Moebius MAs are required, on average, to engage a single ZGMF-1017 GINN with any significant chance of victory. At and after Porta Panama, the Alliance quickly replaces the Moebius with the GAT-01 Strike Dagger and related mobile suit models, redressing the balance and turning the tide against ZAFT.

Three days later, on 14 February, a misfired Earth Alliance nuclear weapon made contact with and destroyed Junius 7, a PLANT-type space colony in the Junius City area of PLANT killing 243,721 civilians. The incident was called the Bloody Valentine Incident and marked the opening of hostilities.

First major battle of the war, was fought near the prewar international space station Yggdrasil. The battle lasted about a month and resulted in the destruction of the space station.

One of ZAFT's earliest landings took place in the friendly Oceania Union territory. The Earth Alliance Pacific Fleet attacked ZAFT's forces. After two days the Battle of Carpentaria ended in victory for ZAFT, who immediately afterwards began the construction of Carpentaria base.

First Battle of Jachin Due (April 17)

The Earth Alliance ordered its 5th and 6th fleets, stationed on the Moon, to attack PLANT on April 17, C.E. 70. They were intercepted by ZAFT forces and engaged at the resource satellite Jachin Due. In the aftermath of this battle the PLANT Supreme Council decided to convert the entire asteroid of Jachin Due into a defensive base.

The Battle of Endymion Crater took place on the Moon. The most notable event was the almost complete destruction of OMNI Enforcer's elite TS-MA2mod.00 Moebius Zero mobile armor squadron - the only survivor was LTJG Mu La Flaga, who received the nickname "Hawk of Endymion" for his performance.

First Battle of Casablanca (May 25)

The Mediterranean fleet of the Earth Alliance fought against a ZAFT submarine carrier fleet near Casablanca. ZAFT won the battle and their forces entered the Mediterranean, and advanced further into the south of Africa.

ZAFT forces launch a drawn out series of raids against the Earth Alliance resource satellite of Nova at Lagrange Point 4. Fighting between the two sides lasts for nearly a month, with neither side ever decisively defeating the other. Ultimately, the Alliance abandons the satellite and ZAFT converts it into the space fortress Boaz.

By late August of CE 70, a territorial stalemate on Earth was reached, with northern Africa and Australia firmly in ZAFT hands, Sub-Saharan Africa, Eurasia, South Asia and the Americas in the Alliance, and the majority of Oceania neutral.

To put an end to Earth Alliance mobile suit development plans, ZAFT planned an operation to seize the mobile suit prototypes secretly developed on the neutral colony Heliopolis, which was owned by Orb; and to destroy their carrier prototype ship Archangel.

Although ZAFT was able to capture four out of five units and heavily damage the colony's harbour, the fifth unit, the GAT-X105 Strike, remained in Alliance hands, was activated and engaged them in battle. The resulting Battle of Heliopolis between the Archangel, the Strike and ZAFT forces caused the complete destruction of the Heliopolis colony from collateral damage caused by both sides, and was the first of a series of battles between the Rau Le Creuset team and the Archangel crew.

The Battle of JOSH-A (Operation Spitbreak) was ZAFT's plan to take JOSH-A, the Earth Alliance's Atlantic Federation HQ, which failed.

ZAFT counterintelligence officers allowed the majority of both ZAFT and Earth forces to believe that ZAFT's next target was Porta Panama and its mass driver. Thus, a large amount of the Earth Alliance forces were transferred to Panama to defend the base. However, this was to leave JOSH-A open to attack, which was the original plan of Chairman Patrick Zala. However, through the betrayal of rogue ZAFT commander Rau Le Creuset, the Blue Cosmos group came to know beforehand about the attack and set a trap for both ZAFT and the Eurasian Federation. The base was primarily staffed and defended by Eurasian Federation personnel while the Atlantic Federation quietly transferred its own personnel elsewhere. When ZAFT attacked, the Eurasian defenders resisted but were effectively wiped out in the face of overwhelming enemy numbers. ZAFT's attack force was then lured into the central bay of JOSH-A when the base's Cyclops System was activated, killing most of the ZAFT attack force as well as what was left of the Eurasian defenders in addition to destroying the installation and everything else within a 10 mile radius of the base in the process. During this battle, Kira Yamato, with the stolen ZGMF-X10A Freedom reappeared and saved the Archangel from the brink of destruction, and due to his intervention, the ship survived the ordeal along with other ZAFT and Earth forces who heeded Kira's warning to escape the Cyclops blast. Several ZAFT submarines and pilots with mobile suits fast enough to outrun the Cyclops shockwave managed to escape as well.

Battle of Porta Panama (May 25)

A few days later, ZAFT retaliated by attacking the Panama mass-driver base with a heavy force. While the Alliance forces introduced their mass-produced GAT-01 Strike Dagger, ZAFT deployed the Gungnir EMP weapon, disabling all Alliance military equipment in the area and resulting in an overwhelming victory for ZAFT. Porta Panama, the last mass driver in Alliance hands, was thereby destroyed, cutting off the Alliance space forces from Earth-based resources. Following the battle, a number of GINN pilots slaughtered the surrendering Alliance soldiers in an act of revenge for the ZAFT personnel that died at JOSH-A. During the battle, Yzak Joule fought a duel with Jean Carry and his GAT-01D Long Dagger unit. Much of the fight was a stalemate until the deployment of the Gungnir EMP weapon which rendered Carry's Long Dagger useless. Refusing to attack an enemy unable to defend himself, Yzak withdrew from the battle leaving behind his opponent.

The Alliance's chief "negoiator", Murata Azrael (Leader of the extremest group Blue Cosmos), delivered an ultimatum demanding that Orb either join the war effort against 'humanity's evil enemy, the Coordinators' or be declared a supporter of PLANT and face military take over. With both sides knowing from the start that the terms were completely unacceptable, Orb deployed their recently completed MBF-M1 Astray units and the Atlantic Federation deployed massive numbers of their new GAT-01 Strike Dagger for the certainly unavoidable battle.

During a ZAFT ceremony, three Extendeds secretly break into Armory One and hijack ZAFT's new Gundams: ZGMF-X24S Chaos Gundam, ZGMF-X88S Gaia Gundam, and ZGMF-X31S Abyss Gundam. They then wreak havoc on the area. Meanwhile, the Extended's mothership, the Girty Lue, attacked the Armory One and the ships defending it using two Dark Dagger Ls and two Doppelhorn Dagger Ls. The Extended eventually escaped Armory One in the hijacked Gundams to return to Girty Lue, and to protect them from pursuers, Neo Roanoke's TS-MA4F Exus engages Rey Za Burrel's custom ZGMF-1001 ZAKU Phantom and Shinn Asuka's ZGMF-X56S/α Force Impulse Gundam. The ZAFT's Minerva later arrived to stop the Girty Lue, but despite all this, the Alliance warship managed escaped with the hijacked Gundams.

As OMNI Enforcer follows a traditional military structure, it consists of Army, Navy, Space Force, and Air Force. No further information is given on these branches in-series.

OMNI Enforcer uses a Japanese style rank system, officer ranks being shown by colored bands on a member's uniform (taking the form of yellow bands with no, one or two blue tabs at the bottom). Enlisted ranks appear not to be designated, NCO ranks are designated with square devices. Civilian auxiliary members do not wear rank tabs. Some rank insignia in the officer chart are conjectural, based on other rank insignia in a common pattern.

Nine officer, three NCO and three enlisted ranks are known; it is not known if other enlisted or NCO ranks exist or if any warrant officer ranks exist in OMNI Enforcer. In addition, the term "Kanchou" applies to the officer in charge of a ship, and can roughly be translated as captain, not to be confused with the military rank of Captain. Murrue Ramius is often referred to as "Ramius-kanchou" rather than "Ramius-taii" as her rank would suggest.

The 4th Naval Fleet, prior to the Battle of Orb

The 8th Fleet during the Battle of Orbit

The 7th Fleet during the Second Battle of Jachin Due 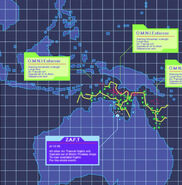 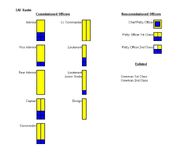 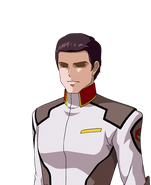 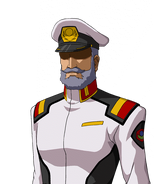 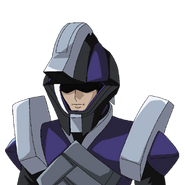 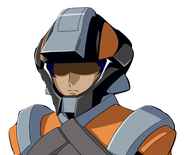 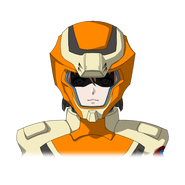 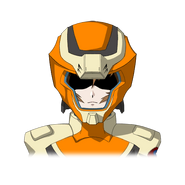 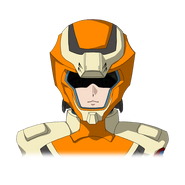 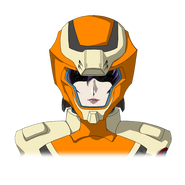 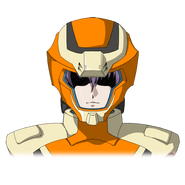 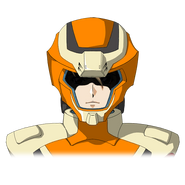 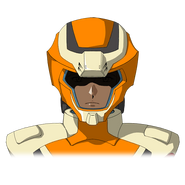 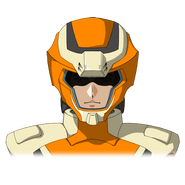 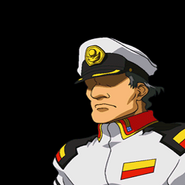 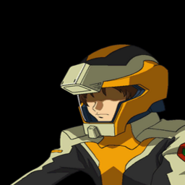 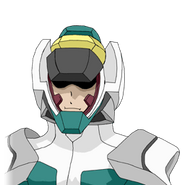 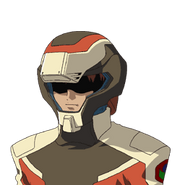 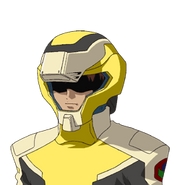 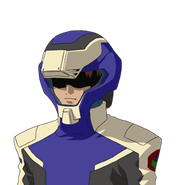 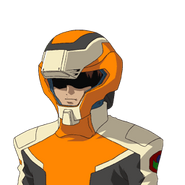 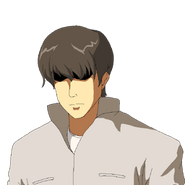 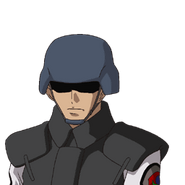 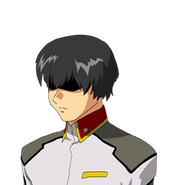 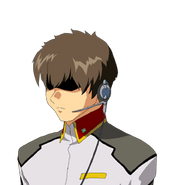 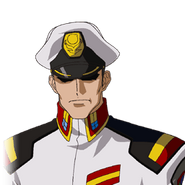