The OMAX-01 Grand Zam is a mobile armor used by the Mars Zeon. It was originally planned to appear in the video game Mobile Suit Gundam F91: Formula Report 0122.

Developed and constructed by Mars Zeon around U.C. 0120, this massive mobile armor was also known as the "Big Zam RF". It was designed as a ground operations unit, and was composed of a modified MA-08 Big Zam torso that was connected to the base of a huge hover unit.

The Grand Zam was under development by the Mars Zeon, however it never saw any use on the battlefield as the Mars Zeon were defeated by the Earth Federation Space Forces before it could see combat. The Mars Zeon main base collapsed as the unit neared completion. 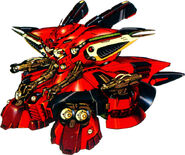