Norm Basilicock is a MS pilot of the Nahel Argama and superior of Riddhe Marcenas. During the Third Neo Zeon War, Norm was among the many who witnessed the RX-0 Unicorn Gundam battle the NZ-666 Kshatriya, driving it off. After that, the Unicorn reverted into its single-horned configuration. Norm attempted to hail the Gundam pilot, demanding to know their name, affiliation and combat objective but the pilot failed to respond, so they took it aboard the Nahel Argama.

Later, the Nahel Argama took refuge in colony debris awaiting reinforcements. As the MS were sent on patrol, Norm tells Riddhe that he can't always rely on luck. Suddenly, they spot an unidentified ship approaching them, which they assumed to belong to the Sleeves. But then discover that it's a derelict Salamis-class, moving on its own backup power source. Captain Otto Mitas then recalled the MS back to the ship.

Unfortunately, their relief was short lived, as Mitas rashly had the derelict destroyed, exposing their position to the Sleeves. Norm and his squadron quickly deployed as the Rewloola appeared. Just as he and Riddhe take off, Lieutenant Homare is shot down while taking off by long range fire from Full Frontal in the MSN-06S Sinanju. While combating against the Sinanju, Riddhe blames Frontal for his comrades deaths getting angry and almost losing his cool as the Sinanju tries to shoot Riddhe but Norm intercepts him with shots from his suit's beam rifle. Norm engages the Sinanju in a beam saber battle, telling Riddhe to get a hold of himself, however the Sinanju takes advantage of this to overpower him and slices it causing it to explode, resulting in Norm's death. 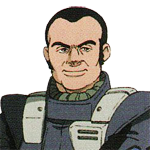