A talented engineer, Nina is extremely protective of her creations (which she expresses by constantly checking data of RX-78GP01 Gundam "Zephyranthes"). Her devotion to the Gundam Development Project is up to the level of obsession, and often leads her into conflict with her colleagues or Earth Federation officers, most notably Kou Uraki.

Her relationship with Kou was rocky at first, as Nina was annoyed by his childishness. However, they gradually became closer during the their time together, and she began to develop feeling for the young pilot. Despite this, Nina still harbored something for her former lover, Anavel Gato.

Born on the Moon, Nina was only 21 years old when she was a mobile suit engineer at Anaheim Electronics. This workhorse of a woman was assigned to be the head engineer of the two new Gundams that are being developed for the Federation. She came into direct conflict with Ensign Kou Uraki when he checks out the new units. However, after Zeon Lieutenant Commander Anavel Gato's "Gundamjack" of Unit 2, Nina allows Kou to pilot the Unit 1 to stop him.

When the MSC-07 Albion is charged with pursuing Gato and retrieving the stolen Unit 2, Nina elects to join them. While aboard the Albion, she grew closer to Kou, and eventually developed feelings for him. She was also once rescued by Kou, after former Zeon pilot Kelley Layzner in his MA-06 Val Walo captured and threatened to kill her. It was also Nina who first suspects that the Delaz Fleet is planning a colony drop.

It is revealed that she once was in love with Gato before the events in Stardust Memory, until he deserted her on the moon; this explains why she is so adamantly opposed to Kou and Gato fighting each other. Towards the end of Operation Stardust, Nina goes searching for Kou, and finds him trying to stop Gato from dropping the colony onto Earth. Instead of assisting Kou, she unexpectedly aims Gato's handgun at the young pilot and shoots at him to keep him from killing Gato, enabling the Zeon officer to escape.

Despite this incident, Nina and Kou apparently reconcile by the end of the series, as she is more than happy to greet him when they meet at Oakley Base. 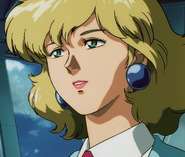 Nina's love of her Gundam creations (from 0083 Rebellion)

Nina Purpleton inside the Albion (from Gundam 0083 OVA)