Nimbus Schterzen (ニムバス・シュターゼン, Nimubasu Shutazen?) is a character from Mobile Suit Gundam Side Story: The Blue Destiny. He is the main antagonist of game.

He calls himself a "Knight of Zeon." He is belligerent, ruthless, proud, and often looks down on others, and refers to Federation soldiers as mooks. He is a swashbuckling man with many flaws, but on the other hand, there were many subordinates and soldiers who worshipped him because of his outstanding skills and his fierce, graceful personality. As a test pilot, Nimbus was forced to lick his chops with Newtype Marion Whelch in the simulator, but he never hated her, and when Marion fell into a coma during the completion of EXAM, he secretly took her to a hospital in Side 6 for protection. The reason why he hunted down and killed Chlust Moses was because of his betrayal of his homeland Zeon, his righteous indignation against Marion for treating her like a laboratory animal, and his sanction against Chlust's self-centeredness and pathological humanity. However, in the end, his obsession with winning the battle against Yuu causes him to become narrow-minded, and as a result, he himself becomes a "pariah of EXAM", and dies a peaceful death thanks to Marion's "salvation".

He is a mobile suit pilot of the Principality of Zeon, and his rank is Captain. He flew the Efreet Custom and Blue Destiny Unit 2. His personal color is red on both shoulders. His final rank is said to be Captain, but since it was a rank he was demoted to after the murder of his superior, his rank before the demotion is unknown. In the manga version, he is a Major. At a court-martial, he was demoted and transferred to Dr. Chlust Moses, who was researching the EXAM system, at the plea of the soldiers present. He then descends to Earth to eliminate Chlust, who has betrayed Zeon and defected to the Federation, and frequently engages Yuu Kajima in battle in the Efreet Custom equipped with the EXAM system, which was still in the experimental stage. After losing his beloved machine in a collision with Yuu's Blue Destiny Unit 1, he kills Dr. Chlust, and takes the Blue Destiny Unit 2 to space. In the end, he engaged Yuu's Blue Destiny Unit 3 in Side 5 space, but was defeated, and died with Unit 3 as collateral damage. 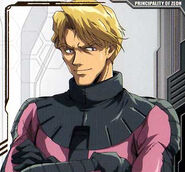 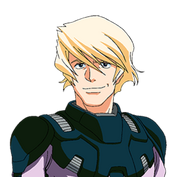