1
New Mobile Report Gundam Wing Sidestory Tiel's Impulse (Tieru no shōdō, 1998) is a sidestory to the Gundam Wing universe that takes place in January of A.C. 196. This one-issue comic with photo-stories of model kits, was included in the New Mobile Report Gundam W: Endless Waltz Ultimate Playing Book (Shin Kidou Senki Gundam W: Endless Waltz Saikyō Playing Book), a model kit magazine-book released in 1998. It is a short comic series that tells the story of a girl named Tiel Noembreux, who is searching for her brother, an OZ pilot who disappeared during the testing of ZERO System 2.0. She and her friends break into a Romefeller manufacturing facility in order to steal mobile suits to aid them on their search.

The plot begins on Colony X-18722. We are introduced to Tiel Noembreux, a 14-year-old choir girl, her friend Krung Ponlamaai, and their guardian/trainer, former OZ soldier Trinoi Levinski. They had arrived on the colony claiming to be part of a choral performance, but secretly move off to find the Romefeller Foundation's secret mobile suit manufacturing plant. Trinoi gains them entry and come across number of mass production model Gundams, and six Gundam Seraphims. They are immediately discovered, and members of the group each steal an mobile suit before the soldiers can capture them.

The trio goes racing off, with Tiel convinced that her missing brother is at the Graveyard of Soldiers. Unfortunately, they are pursued by two Romefeller soldiers, Semis and Dobert, using Gundams of their own. Tiel pleads with them to stand down, explaining that she needs the Gundams to find her brother, who was one of their test pilots. The Romefeller loyalists ignore her pleas and proceed with their attack. Trinoi tries to get Tiel to run, but she stays to help. Krung manages to launch a surprise attack on them, disabling their machines, and they start off again. Finally, they arrive at the Graveyard of Soldiers, a shoal zone made up of damaged MS parts. Unfortunately, this is where Krung reveals her true colors, explaining she accompanied them and stole a Gundam just so she could bring it back to the Mariemaia Army. Krung activates a pair of Capricorn Mobile Dolls and attacked Tiel.

Krung tried to kill Tiel, but her panic causes Seraphim's ZERO System 2.5 to activate. Unable to control her own movements, Tiel fires a blast from her beam rifle, apparently killing Krung and taking out Gundam T'ien-Lung and the Capricorns. At that point Semis and Dobert show up again, their Gundams repaired with parts from the G-Units. Trinoi battles them himself, and manages to destroy both before his Gundam Derringer Arms explodes from heavy damage, killing him. Finally, Tiel's brother Karl appears, piloting the Gundam Lucifer. He claims the ZERO System 2.0 is "telling" him how to bring absolute peace by eliminating all who would perpetrate war, and he wants his sister to help him with it. She doesn't believe it and realizes that the ZERO System has driven him mad. Although hesitant to fight, her brother attacks first, and they both fight. The final shot shows both Gundams locked in combat, slowly incinerating as they fall towards the Earth's atmosphere, with a text balloon explaining that the two were later rescued by a transport shuttle. 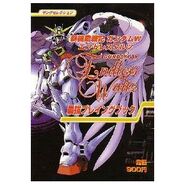 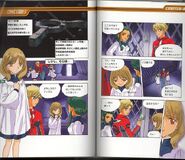 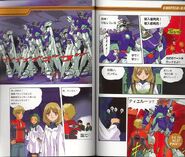 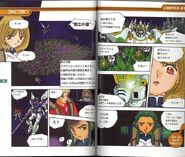 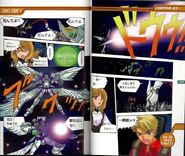 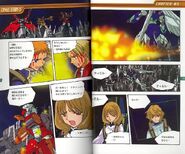 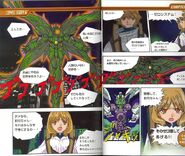 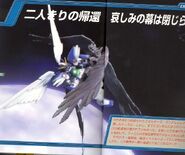