Beginning with the introduction of Preventer agent Kathy Po, the beginning of the story fills in vital details regarding the events in After Colony leading up to the events of the series, including the origins and backgrounds of OZ Leader Treize Khushrenada and Gundam pilot Heero Yuy.

The Early After Colony

In the new era of Mars Century (MC), Kathy Po meets a Father Maxwell and his son, Duo. She hands a data chip from ESUN President Dorothy Catalonia containing 3 segments over to her superior officer Master Chang, who uses the data in order to awaken the "Aurora Princess" from cryogenic sleep and set forth the motions for "Operation Mythos".

Meanwhile, we learn of the history of the young Mars Federation and its government, and the trouble brewing within it with the assassination of its President, "Milliardo Peacecraft". His assassin, a boy with no name, is detained by a "Doktor T" and "Instructor W" and trained along with the Instructor's younger sister, Katherine Oud Winner, with the two young pilots forming a close bond. However, when Katherine defects from the group, she is intercepted by Heero Yuy and Duo Maxwell only to reveal that she is defecting to their enemy- the new leader of the Mars Federation, Relena Peacecraft.

Lieutenant Commander Kathy Po is returning to the Preventers arctic base with with a microchip containing three files that she retrieved from the president of the ESUN Dorothy Catalonia. Durning the return trip to the arctic base she under orders of Master Chang begins to review the files to be better prepared for the upcomming mission "Operation Mythos". The first file contains the contents of a letter between Trieze Khushrenada and a Gundam pilot by the name of Milliardo Peacecraft where Trieze goes as far as reflecting on the end of the Anno Domini calender and the advancement of mankind into outer space, the creation of the first colonies and the adoption of the After Colony calender. He goes on further to address the fact that often times the future is dictated by those who are victorious in battle and that now the defeated are those who should lead the future.

The second file contains a recording of a boy by the name of Duo Maxwell who is reading an empassioned essay about the relationship between the colonies and the Earth. He continues his presentation until asked to return to his seat by his teacher however. As he returns to his seat it can be clearly seen that the pages he was reading from are blank and actually contain a few lines of text where he goes as far as to question man's reason for fighting in the first place. The final file was a grainy video conversation taken in A.C. 196 between Relena Darlian and a elderly gentleman. Where they proceed to discuss how Relena's idelogy has succeeded in at least for the time being brought a end to the circle of hatred that had captured humanity soul.

Relena attempts to guide the conversation towards the topic of Heero Yuy where she attempts to gain some insight into his current mission, However the old man is less than forthcoming and returns to the question of whether humanity can move on from fighting, and questions if that is why she has planned the Mars terraforming project? Relena responds by saying that this similar to her philosophy of pacifism is something she "honestly believes in.” The old man takes some kind of satisfaction in saying that Heero is currently on a mission to destroy a colony-type beam cannon that is almost complete in Earth's orbit, and says that there will always be a need of a "Heero Yuy".

After finally arriving at the arctic base, Kathy quickly moves through the facility to give Master Chang the microchip for operation Mythos. When she finally gets to Master Chang he tells her that approval for the operation has been granted but before he can continue, a voice could be heard behind Kathy saying that "You look just like your mother." Kathy immediately and without hesitation drew her weapon on the man and child standing behind her. The man who was wearing a type of priest garment introduced himself as Father Maxwell and the boy alongside him as his son Duo. Almost immediately Kathy questioned to herself what kind of sick joke was it to name ones own child after that of a Gundam pilot? However before she had time to ask any questions Father Maxwell asked her if she possessed the three necessary files to awaken the "Aurora Princess".

Rondo of Redemption I

Requiem of Chains I

Nocturne of Sorrow I

Rhapsody of Loneliness I

Encounter in Concerto I

The cover to the twelfth tankobon volume-Silent Anthem (Part 1)

The cover to the thirteenth tankobon volume-Silent Anthem (Part 2) 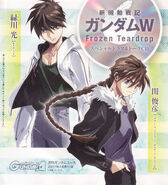 The cover to the Drama CD.

The cover to Chapter One- Heero Yuy sits on his opened cryofreeze pod.

The cover to Chapter Four- Heero Yuy and Relena Darlian- "Where will fate lead these two?"

The cover to Chapter Seven- Heero Yuy and Treize Khushrenada with the Epyon behind them.

The cover to Chapter Eight- Duo Maxwell and Naina Peacecraft.

The cover to Chapter Eleven- The twin princesses of the Sanc Kingdom, Katrina (standing) and Sabrina (seated) Peacecraft.

Little Prince, the cryofreeze capsule in which Relena Peacecraft slept. 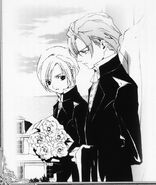 Victoria Base Instructor Treize Khushrenada talks to one of his cadets, Zechs Merquise.

Kathy Po watches a moment from the past of the young Heero Yuy as his mother, Aoi Clark, tends to him.

A young Dorothy Catalonia with her father, Chilias Catalonia.

Treize Khushrenada holds back his brother Vingt after he strikes a male nurse as their mother Angela looks on.

Seis Clark fends off enemy Gryphs to allow his step-son to get to safety.

A young Heero Yuy begins his training under his father, Odin Lowe.

Relena Peacecraft, the new President of the Mars Federation.

Hilde Schbeiker reunites with a hospitalized Duo Maxwell on Mars.

Katherine Winner in the cockpit with Naina and Mille Peacecraft.

Heero talks to Doctor Jay Null about the revival of 'Sam', the first Zero System.

Katrina Peacecraft, in the dress of the Sanc monarchy, with Heero Yuy.

Sabrina Peacecraft and Marticus Rex, the future King of Sanc.

Information gathered from translations listed below. All content is subject to the restrictions and copyrights listed by their respective owners: