The Gundam Wiki
Register
Don't have an account?
Sign In
Advertisement
in: Stubs, After Colony, Series,
and 2 more

Blind Target details a mission in which the Gundam pilots prevent remaining factions of White Fang from capturing the Gundams and carrying out a coup d'état against the newly formed Earth Sphere Unified Nation government.

Heero Yuy leaves his XXXG-00W0 Wing Gundam Zero to sleep deep in the recesses of an abandoned space colony as Relena Darlian speaks to her aide, Chris Marly, about an upcoming peace conference with colonial leaders. Quatre Raberba Winner and Duo Maxwell watch her press conference on television, discussing Quatre's part in it as well. Meanwhile, Chang Wufei is approached and attacked by a mysterious group of men, and Trowa Barton is met by Ralph Kurt, a mysterious man from his past as No-Name. The man insinuates a coming conflict. The chapter ends with Heero contacting Duo to warn him that Quatre is in danger, although Duo is unable to catch up to Quatre in time before an explosion rocks the building he was in.

The chapter opens with General Sogran of White Fang's remnants speaking with the CEO of the Century Discover Corporation about their 'plan' and assumption of Quatre's death. Meanwhile, Ralph attempts to convince Trowa to give him the XXXG-01H2 Gundam Heavyarms Kai and join the White Fang's resistance. They are interrupted by Catherine Bloom alerting Trowa of Quatre's believed death and Ralph leaves Catherine begging Trowa not to fight again. Meanwhile, we see Quatre alive and well in the company of Duo, hiding from view in a closed-off room. Quatre missed the explosion by chance and expresses his guilt at the deaths of the other colony representatives. He and Duo discuss the possibility of the Gundam pilots being targeted. The scene switches to Wufei, who has defeated the suspicious men. They tell him that he is being targeted as a Gundam pilot, and he states that he swears not to give Nataku up to them. In the meantime, Relena and Chris are riding in a car to the conference when they are stopped by more suspicious men. Relena confronts them, but they are interrupted by Heero's arrival, and he leads Relena and Chris to the safety of a space port, where he tells them that he and Relena both are being targeted.

Ralph Kurt and a colleague discuss briefly their need to capture Trowa as they tail him. Trowa comes across Duo, who has come to meet up with him, and together they take down the men following them, and Duo brings Trowa to Quatre. Meanwhile, Relena watches over the minorly injured Chris before returning to where Heero is in the cockpit. When Relena says she misses him, Heero stresses the need to stay strong and focus on their goals, and promises to protect Relena and she falls asleep against him. Meanwhile, Chris reveals her connection with White Fang, contacting Ralph by transmitter. Heero notices the transmission. Ralph is shown speaking to Commander Sogran and is told not to fail. When Relena awakens, they have arrived to an abandoned L3 colony, which Chris recognizes immediately as her home colony, which was destroyed in an Alliance attack when she was a child. Heero, Relena, and Chris meet up there with Duo, Trowa, and Quatre.

The chapter opens with a flashback showing Heero being stopped by suspicious men on his way to school; they mention the Gundams are needed for the 'new war'. Heero relays this memory to the other pilots and Relena, and explains that they are remnants of the White Fang. Meanwhile, Ralph is shown arriving at the colony- also recognizing it, as he and Chris are childhood friends. Trowa and Quatre are shown working, and Quatre suggests because of him, the colony leaders were killed, a notion which Trowa rejects. Duo and the newly arrived Wufei, meanwhile, work on communications. Heero tells Relena to hide safely in a section of the colony, and Chris and Ralph exchange a brief communication. Ralph is then lured into an isolated part of the colony by Trowa and Quatre and taken captive, where he accuses Quatre of betraying the colonies- Quatre retorts that it is Ralph who betrayed the colonies, by killing innocent people. While Duo and Wufei await the coming resistance and discuss the continued existence of conflict, Heero heads off Chris, who is attempting to find the Gundams, and tells her he's aware of their plan and that he won't kill her. As Heero, Duo, and Trowa and their captives meet up in the colony control room, externally tensions are escalating due to Relena's disappearance and the murder of the colony representatives. Ralph and Chris argue that they're doing the right thing by avenging the oppressed colonies, and Heero asks Chris if killing Relena is the right thing, after all the kindness she's been shown. Trowa tells Ralph it's time he was told "the truth". Quatre and Wufei meanwhile discuss the continued hate, and Wufei tells Quatre that people are weak, but that he is not and that strength is righteousness. Relena joins the others in the control room and tells Chris that she doesn't hate her, and that she's trying to learn the pain the colonies have suffered. Finally, Chris and Ralph are shown "the truth"- a broadcast showing that General Sogran had been dealing with the CEO of the Century Discover Corporation, a former subsidiary of the Romefeller Foundation which produced mobile suits for them on the moon. The CEO is using the White Fang to capture the Gundams and produce new, stronger mobile suits in order to start a new war for profits. Ralph is visited in the brig by Trowa, asking what he's been fighting for all this time. Trowa tells him that he envied Ralph, because Ralph had a name, and enemy, and friends to protect, while No-Name had nothing. Ralph remembers that he has Chris to protect. Meanwhile, Heero shows Quatre a feed of Relena and Chris talking about the destruction of Chris's home colony, and Relena asks Chris to support her to fight hatred that caused destruction like that of the colony. A mobile suit squad is detected incoming, and Heero decides to blow up the colony. The CEO of Century Discover chastises Sogran for losing the Gundam pilots, then leaves for the colony conference. At the conference, his attempt at a cover-up is interrupted by Relena and Quatre's arrival, and they reveal his plan to those in attendance. Duo and Wufei blow up the moon factory that had been building new mobile suits, and Ralph confronts Sogran about his betrayal with Heero and Trowa. When Sogran belittles the 'pawns' of White Fang, Heero reveals that he is being broadcasted throughout his base, and that the 'pawns' of White Fang may have issue with him. Elsewhere, Relena and Chris part after the conference, and promise to meet again.

Time jumps back slightly in the epilogue, showing the evacuation of the colony just before its detonation. Ralph and Chris evacuate the White Fang members, while the pilots all bid farewell. Heero and Relena say another final goodbye, and Relena asks Heero to allow her to worry for him, because she wishes to. As she turns to leave, Heero stops her, and pulls her in for a kiss. Duo and Wufei are shown on the moon mobile suit factory again, and Wufei continues to cast doubt upon the future. After the colony conference, Relena, Chris and Quatre reaffirm their dedication to the peace process. Trowa goes home to the circus, bidding farewell to a reformed Ralph. Quatre and Duo meetup again, and Quatre suggests that in order to prevent another occurrence such as this one, that they should send the Gundams into the sun so that they're not a problem anymore. Duo somewhat bitterly agrees. Wufei is meanwhile visited by a representative of the Barton Foundation. Heero is visited by Duo, who delivers the instructions to send his Gundam to be disposed of, and Quatre visits Trowa for the same purpose. Heero tells Duo that he hasn't been able to contact Wufei- then the two view a press conference of Relena, Heero seeming glad that she's doing well. Relena concurrently glances to the teddybear Heero gave her and smiles. Finally, Wufei is shown asking Nataku to lend him its strength, as Mariemaia Khushrenada and a silhouetted Dekim Barton stand behind him. 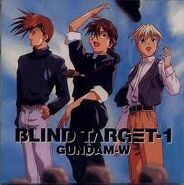 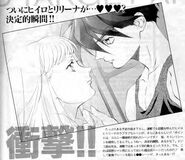