Neneka Nibrou is one of the Zanscare Empire mobile suit pilots stationed at the psycommu fortress Angel Halo. She and several other female pilots were ordered by Katejina Loos to wear swimsuits and distract Uso Ewin, who was piloting the Victory 2 Gundam and managed to infiltrate the fortress. Neneka and her subordinates attack the Victory 2 Gundam with bazookas, but a delusional Uso influenced by the Angel Halo fights back and strikes down most of the Neneka Corps members, with Neneka being vaporized by his beam saber. 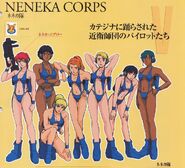 Retrieved from "https://gundam.fandom.com/wiki/Neneka_Nibrou?oldid=443767"
Community content is available under CC-BY-SA unless otherwise noted.