The Nazca-class is a space destroyer first introduced in Mobile Suit Gundam SEED.

Developed after the Laurasia-class, the Nazca-class is designated as a mobile suit carrying, high-speed destroyer (DDMH). Its greatest attribute is its speed, which surpasses even the Earth Alliance's Archangel-class.[1] Its hangar has room for six mobile suits, which can be launched from a linear catapult that extends from the center of the ship.[2] The Nazca-class is armed with a pair of 120cm High-energy Beam Cannons in the front, two 66mm Dual Railguns on both sides of the bridge, five 450mm Multipurpose VLS (with starboard and the port side of the ship each having two VLS) and ten 58mm CIWS in unknown locations.

A pair of rotatable beam cannons mounted on the bow of the Nazca-class serve as the ship's main weapons. A single salvo from these cannons was able to sink a Nelson-class battleship.

Introduced at the beginning of C.E. 71, the Nazca-class was the newest space warship developed by ZAFT during the First Alliance-PLANT War. Initially used to supplement ZAFT's main space warship, the Laurasia-class, the Nazca-class quickly became an important part of ZAFT's space fleet and participated in many battles against the Earth Alliance's space forces.

One notable Nazca-class vessel was the Vesalius, which served as the flagship of Rau Le Creuset's task force. The Vesalius, alongside the Laurasia-class vessel, Gamow, attacked the Orb Union's space colony Heliopolis to capture the new mobile suits of the Earth Alliance.[3] The ship was also used by Rau and his group to pursue the Archangel after it left the space colony, and eventually fought against the Earth Alliance's 8th Space Fleet in the Battle of Orbit.[4][5][6] When the Archangel returned to space several months later, the Vesalius was used to attack it and its fellow ships of the newly formed Three Ships Alliance at the Mendel Colony.[7] During the battle, the Vesalius was destroyed by the combined firepower of the Izumo-class vessel, the Kusanagi, and the FFMH-Y101 Eternal.[8]

The Amzen, Rembrandt, Gansback, and Bonstell were Nazca-class vessels that were part of a ZAFT expeditionary force that was wiped out by Rondo Gina Sahaku with his MBF-P01-ReAMATU Gundam Astray Gold Frame Amatsu. The Nazca-class eventually began replacing the Laurasia-class as ZAFT's main space vessel, although this process wasn't finished even during the Second Alliance-PLANT War that occurred two years after the end of the first war. However, by that point, more Nazca-class vessels were in service than Laurasia-class.

In C.E. 73, one Nazca-class, the Voltaire, served as the flagship of Yzak Joule's team and was accompanied by its sister ship, the Rousseau, in a failed attempt to destroy a large fragment of Junius Seven's remains before it fell to Earth.[9] Another Nazca-class was equipped with the experimental Neutron Stampeder and participated in the Battle of Aprilius One, where it was instrumental in thwarting a nuclear attack by Earth Alliance forces shortly after the declaration of the Second Alliance-PLANT War.[10] Three such vessels (the Holst, Caernarfon and one unknown name) made up the fleet which chased the Eternal after it fled its asteroid base. The three ships and most of their mobile suits were subsequently heavily damaged by Kira Yamato's new ZGMF-X20A Strike Freedom Gundam.[11] At the climax of the second war, several Nazca-class were part of the Three Ships Alliance's new fleet, consisting of ships from different nations, and participated at the Battle of Messiah.[12][13] 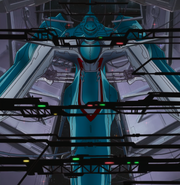 Destruction of the Vesalius

A Nazca-class equipped with neutron stampeder 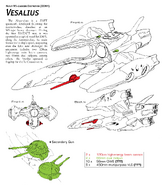