The Gundam Wiki
Register
Don't have an account?
Sign In
Advertisement
in: Characters, Cosmic Era characters, Female,
and 2 more
English

Natarle comes from a long family history of honor and prestige to the Earth Alliance, it was natural for her to continue the lineage as a career soldier. As an officer, she's less emotional, caring, strict, and by-the-book when it comes to taking action. Because of her constant soldier mentality, it often makes her less likable, but also maintains perspective in terms of tactical and military decisions as she is willing to do almost anything to reach a certain end.

She's a strong supporter to the Alliance. Although she is shocked upon hearing that her superiors were planning to sacrifice her former crewmates along with the Eurasian forces at the Battle of JOSH-A, she accepted the Alliance's decision. After the Earth Alliance destroys Boaz with nuclear missiles, Natarle began to seriously question whether or not she is doing the right thing. When Azrael ordered the Dominion to kill Captain Ramius and the rest of her former crewmates on board the Archangel she defies his orders.

Natarle is least understood by her peers. She has been driven to be a career soldier so long that people forget that she's still a woman. Driven by her sense of duty and emotional protective nature, she never showed her softer side for people to appreciate. It was only in the final moments of her life that she finally broke her mold and listened to her heart.

Natarle is a skilled tactical officer, excelling in ship combat tactics, even outmaneuvering the Archangel during the first battle in which it and the Dominion met. Furthermore, she knows how to use the environment to her advantage, thus allowing her to attack decisively. Trained to be a career soldier, she's a capable at piloting ships and using firearms.

The child of a military family, Natarle was a promising young Earth Alliance officer. Stationed on Orb's Heliopolis colony as part of a secret project to produce weapons capable of fighting ZAFT's mobile suits, Natarle was one of the few survivors when ZAFT's Le Creuset Team raided the colony to seize the new weapons.[1] Although an Ensign at the time, during the raid she temporarily assumed command of the Archangel,as she was the most senior officer on board, in order to launch the ship in haste.[2] She then handed over command of the ship to Lt. Murrue Ramius, who was the most senior surviving officer.[3] She then become the Archangel's executive officer and supervised the ship's Combat Information Center, effectively becoming Murrue's 2nd-in-command. She held reservations about allowing Kira Yamato, a Coordinator, to remain on board the ship as a Gundam pilot, but Captain Murrue Ramius disagreed.[3]

Aboard the Archangel, Natarle and Murrue came into conflict several times, the first incident occurred during the Battle near Junius Seven, when Natarle threatened Lacus Clyne to stave off ZAFT forces after they destroy an Atlantic Federation fleet.[4] The second incident occurred after the Archangel rendezvoused with Admiral Duane Halberton and his Eighth Fleet. Natarle said that the Earth Alliance couldn't afford to let Kira leave and suggested taking his parents hostage. Admiral Halberton rebuked her and both actions produced friction between her and Captain Ramius.[5]

Nevertheless, Natarle was a superb tactical analyst with keen judgment and a knack for swift decision-making, which made her a valuable asset to the Archangel. When they finally arrive at JOSH-A, Natarle was transferred to a shore assignment. In their last encounter face-to-face, Murrue thanked Natarle and said she will make a fine Captain someday.[6]

When ZAFT launched Operation Spitbreak on JOSH-A in an effort to wipe out of the Alliance, the Archangel and Eurasian forces were dispatched to deal with them, Atlantic Federation personnel secretly made their escape, Natarle was among them.[6] However, she overheard a few soldiers discussing the Atlantic Federation's plan to use a secret Cyclops System underneath JOSH-A to wipe out the ZAFT forces and the base's defenses.[7]

Natarle was eventually promoted to Lieutenant Commander and was again reassigned to command as the new Captain of the Dominion, the Archangel's sister ship.[8] While attempting training exercises with her crew, a representative from the Defense Committee, Muruta Azrael, came to the Dominion as an observer, explaining that they were to hunt down and destroy the Archangel, which had survived the Battle of JOSH-A, and had gone rogue.[9] Tragically, she was forced to fight her former crew at the Battle of Mendel. At first, she tried to appeal to her former crew to come back to the Alliance, but Murrue politely declined, explaining that they have serious doubts about Alliance forces in their entirety. Azrael then mocked Natarle's attempts to solve things through discussion and then ordered the Calamity, Raider and Forbidden to launch and attack.[9] Through Natarle's strategies, they were able to outmaneuver the Archangel, but came at a disadvantage when it received firing support from the Eternal and Kusanagi.[10] During the final stages of the battle, ZAFT launched a life pod carrying Flay Allster, carrying data on the Neutron Jammer Canceller. Natarle ordered for her retrieval and with her arrival into the Dominion, Flay presented them with the disk which interested Azrael to put this technology to use by using it for nuclear weapons to use against the PLANTs.[11][12]

Final Battles of the War & Death

In September, the Dominion joined the Alliance fleet to engage the whole of the ZAFT forces in Operation Peacemaker. The Alliance forces engaged ZAFT at the Battle of Boaz, where the Dominion's Gundams escorted the Peacemaker Taskforce when they fire nuclear missiles at the fortress, destroying it and wiping out its defending forces.[12] At the Second Battle of Jachin Due, the EA attempted to repeat Boaz and fire nuclear missiles at the PLANT Colonies, but they are all intercepted by the METEOR equipped Freedom and Justice.[12] Then, ZAFT unveiled its ultimate weapon, GENESIS, which wiped out half of the EA fleet, forcing Natarle to order a withdrawal. Azrael, disregarding Natarle's belief that the fleet should abandon the battle, ordered reinforcements from the Ptolemaios lunar base to meet up with them to re-engage the ZAFT forces.[13]

As the EA Fleet began is second attack on the PLANTs, GENESIS fired is second shot, destroyed half of the EA's reinforcements and the lunar base. Outgunned and outmatched, Azrael snapped and ordered that every last nuclear missile be fired at the PLANTs, ignoring Natarle's constant pleas for him to rethink his orders as that would not eliminate the threat of the GENESIS to the earth. Azrael, becoming obsessed with the destruction of the PLANTs, then threatened to shoot her for insubordination. When the Archangel came into view, Azrael demanded that she destroy that ship full of traitors once and for all, an order which Natarle was hesitant to carry out. In the ensuing fight, both ships were heavily damaged. Natarle, wishing with all her heart that her former crew-mates could just end this. Flay, who was acting as the communication officer at the time, tried to warn the Archangel, causing Azrael to attack and aim his gun at her. Natarle, having had enough, held him back and ordered her crew to abandon ship and even encouraging Flay to go to the Archangel. In their struggle, Natarle was shot, forcing her to release Azrael who tried to fire from the soon to be doomed ship. When Natarle trapped them inside the bridge, Azrael shot her several times in an attempt to get her to let him out. Presuming her finished, he attempted to fire the remaining Lohengrin, but the shot was intercepted by Mu in the heavily damaged Strike Gundam. She mocked him one last time, saying that he's already lost, prompting Azrael to shoot her again before the Archangel fired back, destroying the Dominion and killing Azrael and Natarle who looked no less than content with her fate.[14] 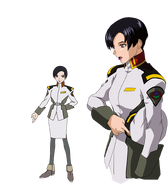 Natarle right before her death