Nanami Nanase (ナナセ・ナナミ, Nanami Nanase? aka Nami in GBN) is a supporting character from Gundam Build Divers. An employee at the Gunpla store inside The Gundam Base Tokyo, she lets her friends, Riku Mikami and Yukio Hidaka, experience the Gunpla Battle Nexus Online for themselves for the first time [1].

A helpful young woman who works at "The Gundam Base", the store that Riku and his friends have frequented for a long time. However, her fundamental Gunpla knowledge is weak, and she often mixes up the names of the mobile suits.[2] For example, she mistakenly called Riku's High Grade GN-0000 00 Gundam the "Gundam O2" (like oxygen) [1].

In her first trip into GBN, Nanami participated in the Nadeshiko-athlon, alongside Sarah, Momo and Ayame. During the event, Nami and Sarah stumbled upon the hidden setup in the course, and obtained rare items after freeing a NPD (Non-Player Diver) stuck under a rock. These items included a P-Spray Gun, U-Nipper Javelin (simply called "Nipper Javelin" and also the "Miracle Nippers"), D-Separator Shield and G-Marker Saber L-Compressor Backpack [3].

After the Second Coalition of Volunteers Battle, she witnessed Koichi and Tsukasa giving the EL-Diver May a physical mobile doll body [4]. Later, she became a bodyguard of sorts for May whenever the BUILD DiVERS' had offline meetings [5][6].

She is a caring elder sister figure to Riku, whom she has had long relationship with.[2] 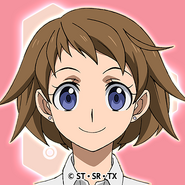 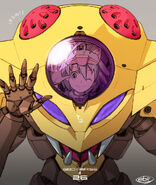