During Char's visit to the Side 3, Colony 1's newtype labs in Zum city she is working there.[1]

This talented woman served as both the director of Neo Zeon's Newtype Labs and as Char's chief operation officer, responsible for planning strategies for the Neo Zeon fleet. Char clearly thinks highly of Nanai's abilities, entrusting her with the all-important assault on the Earth Federation's Luna II base. However, in the eyes of most, their romantic relationship was largely for show but although Char's exact feelings for her remain unknown, Nanai has been shown to be genuinely in love with him which is one reason why Nanai soon becomes jealous of Char's interest in the young Newtype Quess Paraya and why she cries for him when he apparently dies after his final fight with Amuro Ray.

Char's Counterattack - Beyond the Time

In Beyond the Time, Nanai Miguel finds herself in the Augusta Newtype labs on Earth where she assaults a member of staff after he releases her restraints.

Following this she is subdued with a Taser and put in a quiet room where she hallucinates and sees a small child in a hood. Later, she meets other Newtypes in the Augusta lab and quickly befriends a girl named Angela.

After a simulation, Nanai spots Angela yelling at one of the scientists and marches off to her room. Nanai visits Angela to discover that Angela's visit with her mother was postponed again due to sickness. Nanai goes to sleep and has a dream where she was calling out to a blur. In the end of the dream, the blur cleared and showed that it was Char.

Nanai was awakened by Angela to go examine dolphins through a underwater window. Angela explains her view of Newtypes, how dolphins communicate, and then talks about how much she wants to see her mother.

Some time later, Nanai confronts the director of the Augusta laboratory and accuses him of lying to Angela. Nanai also tells him that she believes that Angela's mother never existed in the first place. The director asks her how did she know and she responded "Newtype intuition." The directer mocked her saying that the belief of Angela's mother's existence was a mental crutch and the only thing to keeping Angela from a mental breakdown. Something went wrong with Nanai as she began coughing and falling into unconsciousness. The director then had her put in solitary confinement.

Nanai wakes up sensing Angela crying out for her mother. She also senses that Angela has went on a rampage during a test and injuring other test subjects. Nanai runs out piloting a damaged training mobile suit in an attempt to stop Angela. Nanai begged her to stop, but Angela demanded to see her mother. Nanai attempted to console her, but failed when the scientists activated Angela's mobile suit's self destruct program. Angela dies asking Nanai if she knew the whole time that her mother never existed.

Nanai wakes up in a dream. But it was no dream. The child in a hood appears and tells her that Nanai was reliving a memory in her mind. The child tells Nanai that it is a guide and tells her that the only way to return to reality was to remember everything that happened prior to Char's Counterattack.

She was then awoken by Quess Paraya and received hospitality from her Newtype friends. 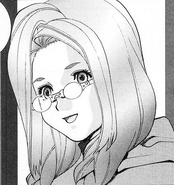 Nanai Miguel as seen on Mobile Suit Gundam: Char's Counterattack - Beyond the Time

Nanai Miguel as seen on Mobile Suit Gundam: Char's Counterattack - Beyond the Time 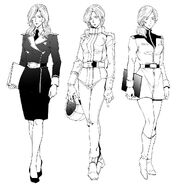 Retrieved from "https://gundam.fandom.com/wiki/Nanai_Miguel?oldid=483293"
Community content is available under CC-BY-SA unless otherwise noted.