Cecily's mother is the daughter of Meitzer Ronah, the leader of the Crossbone Vanguard. Ten years ago Nadia eloped with Theo Fairchild and fled the Ronah family, eventually taking up residence at the Frontier IV space colony. In U.C. 0120, Nadia once again disappeared in order to escape detection by the Ronah family, this time leaving her daughter in the care of her stepfather Theo. She was momentarily seen with a group of resistance fighters that met up with the Space Ark in Frontier I. Sometime later she returned to Theo so that he could take her to see Cecily. 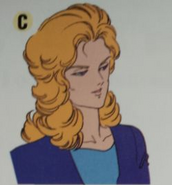 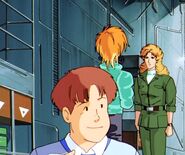