Pilot only (in MSN-03 Jagd Doga cockpit in main body)(UC:PH)

The NZ-999 Neo Zeong is a Mobile Armor introduced in the Mobile Suit Gundam Unicorn OVA and was piloted by Full Frontal during the Laplace Incident.

The Neo Zeong was developed as an exclusive machine for Full Frontal, it consisted of the MSN-06S Sinanju being carried in a huge 116 meters tall hull unit. This massive base attack mobile armor has an impressive array of beam weapons, including wire-guided funnel bits located in its hands and several mega particle cannons on its body. The funnel bits can also hijack other enemy mobile suits and turn them against one another. For defense, the machine has multiple I-Field generators. The Neo Zeong's deadliest weapon however is the large psycommu armament, the Psycho Shard Generator, which can actualize the pilot's thoughts.

The Sinanju serves as the core unit for the Neo Zeong and can utilize its beam sabers or rocket bazookas with its free hands. Thanks to an enhanced psycho-frame cockpit, the Neo Zeong can be piloted by Full Frontal's mind through his mask without being in the cockpit and utilize its weapons perfectly. Mounted at the bottom of the Neo Zeong is a pair of sturm boosters, a combination of propellant tank and booster unit, that grant better mobility and cruising range. Should the boosters be destroyed, the Neo Zeong can rely on the skirt armor's own thrusters for mobility.

Mounted in the head of the Sinanju, the core unit of the Neo Zeong, the pair of vulcan guns are not very powerful and typically unable to penetrate mobile suit armor, but they are useful in restricting enemy movements, intercepting missiles and the likes.

The beam sabers are part of Sinanju's armaments and stored in its arms. They are used by the Sinanju when enemies close in on the Neo Zeong.

Mounted on Neo Zeong's waist, this cannon has a limited rate of fire but the highest output of all the unit's ranged beam weaponry.

The Neo Zeong has six Mega Particle Cannons on its shoulders, four in front and two in the back. These cannons can fire a scatter beam or a focused beam, and the latter is capable of punching a hole through a colony's wall.

The Psycho Shard Generator is a new, large psycommu armament and is also the Neo Zeong's most powerful weapon. The generators are stored within the sides of the skirt armor and in the large shoulder thruster units. Once deployed, they create a massive ring of golden hexagonal crystals, the Psycho Shards, behind the machine's back. The psycho shards then generate a massive psycho field, which is said to be capable of actualizing the pilot's thoughts, and this resulted in the destruction of the Unicorn and Banshee's weapons. Many details about the Psycho Shard technology is unclear, and it is rumored that Full Frontal, possessed by Char Aznable's spirit, designed it with knowledge from a higher plane of existance.[1]

Used by the Sinanju within the Neo Zeong, the two rocket bazookas are part of Sinanju's armaments and are stored in the Neo Zeong's shoulder-mounted weapon containers. Each shot is capable of destroying a single MS and can puncture the armor of most battleships.

The same shield as used by Sinanju, it is mounted on the MS's back when the suit is in the Neo Zeong.

The two primary arms of the Neo Zeong have five large wired funnel bits on the tip of each arm, and when they are destroyed, a spare set stored within the arms can be deployed as replacements. The four secondary arms have the same wired large funnels bits, but they are stored in the arms and deployed only when required. As with other funnels and bits, the wired large funnel bits are used to engage multiple enemy units or overwhelm a single target. Each funnel bit is armed with a beam gun that can be used while docked or when deployed as wire-guided remote weapons. The funnel bits can hijack a target mobile suit by deploying three drill-tipped wires that latch onto and drill into the target. Once hijacked, the enemy MS can be used to engage other enemies. While the bits lack the dexterity of regular mobile suit hands, they are still capable of pinning down enemy suits and has enough strength to crush a normal mobile suit's head.[2]

Two massive propellant tanks ending in rocket thrusters are connected to the underside of the Neo Zeong, providing it with higher mobility and additional fuel for longer deployment times as well as improved cruising range. Should these sturm boosters be destroyed, the main thrusters on the underside of the mobile armor will take over.

The psycho-frame is a technology that builds the brainwave-to-machine code translator known as psycommu into the metal frame of a Mobile Suit. This allows a Newtype pilot to mentally connect with their mobile suits operating system, similar to the bio-sensor, and directly issue commands via the pilots brainwaves. Arguably, a mobile suit with a psycho-frame and Newtype pilot will have a greater response time than an ordinary suit and pilot.

The Neo Zeong has three landing gears, two stored underneath its front skirt armor and one mounted in the rear skirt armor. Due to their large size, the two front landing gears can also serve as sub-arm units to grab onto enemy mobile suits which get close to the Neo Zeong.

The Neo Zeong has four waist I-Field Generators, two at the front and two at the rear, which protects it from all beam attacks. The duration of the I-Field itself is unknown, though the actual coverage extends only to the main body of the mobile armor.

The shoulder compartment of the Neo Zeong contains weapon containers that can be used to store the Sinanju's rocket bazookas, as well as other weaponry such as missiles. 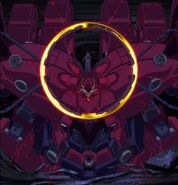 End of the battle 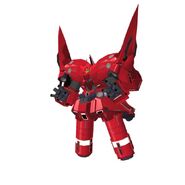