The NZ-999 Neo Zeong was developed as an exclusive machine for Full Frontal; the II (read as "second") Neo Zeong was assembled using spare parts created during the development of the original.[2] It was seized by the Earth Federation Forces, handed to Luio & Co., and then transferred to the Republic of Zeon.[3] A new frame was added to the front of the shoulder weapon bay in order to increase the rigidity, and the front hatch of the weapon bay was removed.[2] The added frame is painted red, becoming a characteristic feature.[2] In terms of armament, wired guidance function was incorporated into the arms, making movements reminiscent of the MSN-02 Zeong's possible.[2]

Mounted in the head of the Sinanju Stein, the core unit of the II Neo Zeong, the pair of vulcan guns are not very powerful and typically unable to penetrate mobile suit armor, but they are useful in restricting enemy movements, intercepting missiles and the likes.

The beam sabers are part of Sinanju Stein's original armaments and stored in its arms. They can be used by the Sinanju Stein when enemies close in on the II Neo Zeong.

A large melee weapon which has beam blade generators on both ends.[3] It is a weapon designated to the Sinanju Stein and can also be used as a Beam Naginata.[3] It is a combination of two modified Sinanju's beam axes, with their grips extended for a longer reach.[4] It can be disconnected into two parts at the grip section and stored separately on the II Neo Zeong's shoulders, below the weapons container.[4]

Mounted on II Neo Zeong's waist, this cannon has a limited rate of fire but the highest output of all the unit's ranged beam weaponry.

The II Neo Zeong has six Mega Particle Cannons on its shoulders, four in front and two in the back. These cannons can fire a scatter beam or a focused beam, and the latter is capable of punching a hole through a colony's wall.

A large psycommu armament and also the II Neo Zeong's most powerful weapon. The generators are stored within the sides of the skirt armor and in the large shoulder thruster units. Once deployed, they create a massive ring of golden hexagonal crystals, the psycho shards, behind the machine's back. The psycho shards then generate a massive psycho field, which is said to be capable of actualizing the pilot's thoughts.

The same type of weapon as used by the Sinanju, the two rocket bazookas are stored in the II Neo Zeong's shoulder-mounted weapon containers. They are used by the Sinanju Stein and each shot is capable of destroying a MS or puncture the armor of most battleships.

Used by the docked Sinanju Stein, the pair of beam rifles are essentially the high beam rifle without the jacket parts, making them the same as the one used by the Sinanju.[4] They can be stored on the II Neo Zeong's shoulders, below the weapon containers.[4]

The same shield as used by Sinanju Stein, it is mounted on the MS's back when the suit is in the II Neo Zeong.

The two primary arms of the II Neo Zeong have five large wired funnel bits on the tip of each arm, and when they are destroyed, a spare set stored within the arms can be deployed as replacements. The four secondary arms also have the same wired large funnels bits, but they are stored in the arms and deployed only when required. As with most funnels and bits, the wired large funnel bits are used to engage multiple enemy units or overwhelm a single target, and each of them is armed with a beam gun that can be used while attached to the arms or when deployed as wire-guided remote weapons. The funnel bits also can release 3 drill-tipped wires for latching onto a Mobile Suit and hijacking it. Once hijacked, the enemy MS can be used by the II Neo Zeong to engage other enemies. Although the bits lack the dexterity of regular mobile suit hands, they are still capable of pinning down enemy suits and has enough strength to crush a normal mobile suit's head.

Two massive propellant tanks ending in rocket thrusters are connected to the underside of the II Neo Zeong, providing it with higher mobility and additional fuel for longer deployment times as well as improved cruising range. Should these sturm boosters be destroyed, the main thrusters on the underside of the mobile armor will take over. The Sturm Boosters also have to be removed when the II Neo Zeong is landing.

The psycho-frame is a technology that builds the brainwave-to-machine code translator known as psycommu into the metal frame of a Mobile Suit. This allows a Newtype pilot to mentally connect with their mobile suits operating system, similar to the bio-sensor, and directly issue commands via the pilots brainwaves. Arguably, a mobile suit with a psycho-frame and Newtype pilot will have a greater response time than an ordinary suit and pilot.

The II Neo Zeong has four waist I-Field Generators, two at the front and two at the rear, which protects it from all beam attacks. The duration of the I-Field itself is unknown, though the actual coverage extends only to the main body of the mobile armor.

The shoulder compartment of the II Neo Zeong contains weapon containers that can be used to store the Sinanju Stein's rocket bazookas, as well as other weaponry such as missiles. 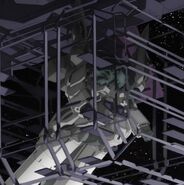 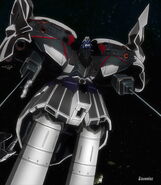 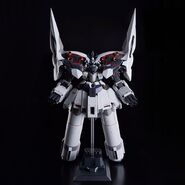 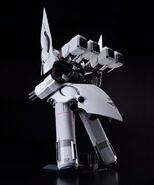 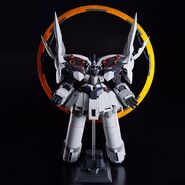 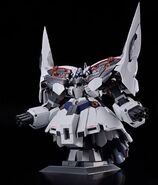 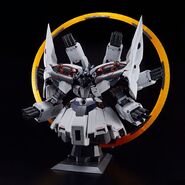 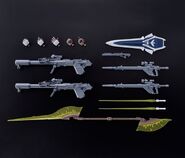 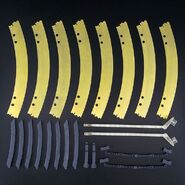 Information and Lineart
Retrieved from "https://gundam.fandom.com/wiki/NZ-999_II_Neo_Zeong?oldid=496454"
Community content is available under CC-BY-SA unless otherwise noted.