After the confrontation on the SCVA-76 Nahel Argama, further improvised repairs under the guidance of the Garencieres's crew were made to the NZ-666 Kshatriya Besserung to make the mobile suit combat ready for the final push towards Laplace's Box. The lack of proper repair facilities, along with the use of Federation equipment and parts in the restoration, ended up creating a one-of-a-kind - but nonetheless highly effective - machine.

The damaged head unit and the missing armor around the cockpit area were repaired using parts derived from mobile suit spare parts carried on board the Nahel Argama. Out of the four of the shoulder binders, only two were repaired, the two that were lost were replaced with a pair of large propellant boosters. Losing the two binders actually reduced the suit's weight, while the boosters increased the suit's thrust to weight ratio and grants it excellent mobility.

The Kshatriya Repaired has new weapons in the form of a beam gatling gun mounted in the frame of its makeshift right leg, a hyper beam javelin mounted in its left forearm and altered funnels stored in the two remaining binders. It also retains some of the original Kshatriya's weapons.

Out of the original Kshatriya's twelve mega particle cannons, the Kshatriya Repaired only retains six of them: two on each of the remaining binders and another two on the chest.

The Kshatriya Repaired is armed with a total of three beam sabers for melee combat. One is stored in the right forearm for quick responses to close combat threats and can be used as beam gun when not in use. The other two are small beam sabers mounted in the sub-arms in the Kshatriya Repaired's binders, allowing it to catch unsuspecting foes off-guard.

Weapons that fire live ammunition, they are mounted in the chest. These are used mostly to intercept small missiles.

An optional equipment for the original Kshatriya meant for providing suppressive fire, the Kshatriya Repaired now mounts it within the right leg's frame. The weapon is capable of unleashing a torrent of beam fire, though individual shots inflict relatively light damage to the target. It has a scope for aiming and a handle that can flip out for use by the right hand.

Mounted in place of the left forearm, it is a melee weapon embedded with Psycoframe material and has a javelin-shaped as well as axe-shaped beam emitters. The hyper beam javelin is originally an optional handheld equipment for the RX-0 Unicorn Gundam and serves as the prototype for the Armed Armor series of weaponry.

Six altered funnels are stored within each binder. Unlike the funnels used by the Kshatriya, each altered funnel has a small sturm faust warhead attached to the tip instead of a beam gun and is used for direct attacks on the enemy, essentially making them psycommu guided missiles.

A Sturm Faust is a simplified, disposable rocket launcher that has been in use since the One Year War. The Triple Sturm Faust is a combination of three Sturm Fausts with a stock unit containing a trigger and sensor for higher accuracy. The weapon uses the same sensor unit and warheads as the AMS-129 Geara Zulu's Sturm Faust.

The Psycoframe is a technology that builds the brainwave-to-machine code translator known as Psycommu into the metal frame of a Mobile Suit. This allows a Newtype or Cyber Newtype pilot to mentally connect with their mobile suits operating system, similar to the bio-sensor, and directly issue commands via the pilots brainwaves.

Hidden in the binders, the sub-arms can be used to destroy an opposing mobile suit's arm simply by latching on to it, or used to capture a mobile suit. Each sub-arm is equipped with a small beam saber.

Located in each of the binders, it is a device that produces a Minovsky particle barrier around the mobile suit, capable of deflecting incoming enemy beam weapons fire.

To replace its two lost binders, the Kshatriya Repaired now mounts two large propellant boosters instead. As its name implies, it is a combination of a large propellant tank and propulsion system that enhances the Kshatriya's speed and mobility, and extends its endurance and operation time. These boosters are originally prototype optional equipment for the AMS-129 Geara Zulu. They were also featured as optional equipment for YAMS-130 Krake Zulu.

More information about the Kshatriya Repaired can be found on Marida Cruz's page. 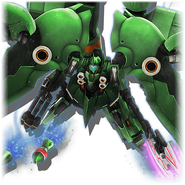 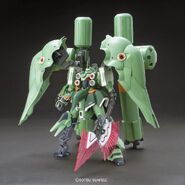 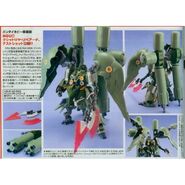 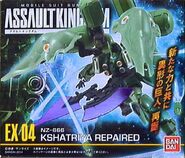 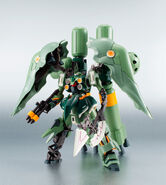 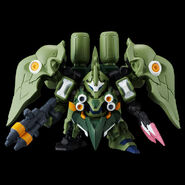