The NZ-666 Kshatriya (クシャトリヤ, Kushatoriya), aka the "Quad-wing", is a mobile suit featured in the novel and OVA series Mobile Suit Gundam Unicorn. It was piloted by Marida Cruz.

The Kshatriya was designed with the intention of miniaturizing the NZ-000 Queen Mansa - which was more than 40 meters tall - while retaining its performance. This was done through the implementation of new technology, including the installation of Psycho-Frame around its cockpit. Since Neo Zeon lost the ability to manufacture Psycho-Frame following the Second Neo Zeon War, the Kshatriya became a one-off unit.[1] Another factor that contributed to its miniaturization was that most of its functions are concentrated in its four wings/binders.[1][2] As a result, the Kshatriya was almost half the size of its predecessor. The four massive wings/binders are also the Kshatriya's greatest features, each containing two mega particle cannons, a funnel container with six funnels, an I-Field generator, flexible thrusters, a propellant tank, and a sub-arm equipped with a small beam saber.[1] Each wing/binder also serves as an AMBAC unit.[1] Like its predecessor, the Kshatriya requires a powerful Newtype pilot.[1]

The Kshatriya is armed with a total of six beam sabers for melee combat. Two are located in the forearms and can be used as beam guns when stored, while the remaining four are small beam sabers mounted in the sub-arms that are in the Kshatriya's wings/binders. The generated beam blade is strong enough to cut through standard mobile suit armor with ease.

A pair of rapid firing projectile weapons that are mounted in the chest, between the Mega Particle Cannons. They are primarily for restricting enemy's movements in close-range.

The Kshatriya is armed with twenty-four funnels for all-range attacks. Each funnel possesses a beam gun that is capable of melting an enemy mobile suit's armor. Six are stored within each of the Kshatriya's four wings/binders, and are remotely controlled primarily through use of the Psycho-Frame equipped cockpit. These funnels are used primarily to allow the Kshatriya to engage large numbers of enemies at the same time, or to overwhelm a powerful foe.

The Kshatriya is armed with twelve mega particle cannons. Four are mounted on the chest and they can be fired together to create a single, very powerful beam, or to fire a scattering beam in a manner similar to a shotgun. Two more of these cannons are mounted on each wing/binder, allowing the Kshatriya to fight off enemies from any direction.

Used only in the novel, a pair of beam gatling guns is attached to the right forearm.

Hidden in the binders, the sub-arms can be used to destroy an opposing mobile suit's arm simply by latching on to it, or used to capture a mobile suit, as shown by its capture of the Unicorn. Each sub-arm is equipped with a small beam saber.

Located within each binder, it produces a Minovsky particle barrier around the mobile suit, capable of deflecting incoming enemy beam fire.

The Kshatriya is used by remnants of Neo Zeon called "The Sleeves" and is Marida Cruz's personal unit. It is first seen in combat against three Jegans during its trip to the Industrial 7 colony. After being alerted to Londo Bell forces near the colony, Marida Cruz uses the Kshatriya to attack the enemy mobile suits consisting of RGM-89D Jegans, RGZ-95 ReZeLs, and RGZ-95C ReZeL Commander Types in order to give Suberoa Zinnerman and their ship Garancieres time to escape. The resulting battle ends up reaching the colony interior and results in severe civilian casualties. Despite being significantly outnumbered, the Kshatriya manages to destroy a majority of the mobile suits.

Marida later manages to locate Mineva Lao Zabi, but is ambushed by a D-50C Loto and ends up losing her and destroying the Loto. Upon recovering however, she was unable to search for Mineva, as the RX-0 Unicorn Gundam, piloted by Banagher Links, attacked the Kshatriya and forced Marida outside of the colony. There, the Unicorn Gundam's Destroyer Mode activated, and the Kshatriya lost two of its shoulder binders and several funnels in the resulting battle. Upon the recovery of Suberoa, Marida broke off from the battle and retreated.

The Kshatriya reappeared during the Londo Bell/ECOAS offensive to take back the Unicorn Gundam. Marida faces off against Banagher, but Unicorn's NT-D System activates, taking control of Kshatriya's funnels. Banagher manages to severely damage the Kshatriya and is about to make the finishing blow when the Psycho-Frames resonate, giving Banagher a glimpse of Marida's past as Ple Twelve. Banagher takes the heavily damaged Kshatriya and Marida on board the Nahel Argama.

After the Battle of Palau, the crew of the Nahel Argama began repairing the Kshatriya, thus becoming the NZ-666 Kshatriya Besserung. 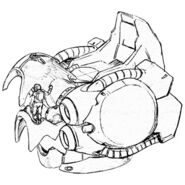 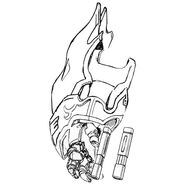 First person view of the cockpit

Overhead view of the cockpit

As seen on the Gundam Unicorn Novel Promotional Video

As featured in Gundam Calendar 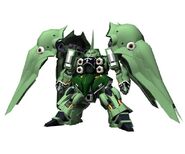 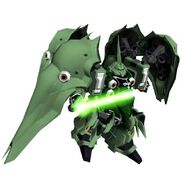 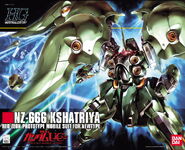