The α Azieru is an experimental mobile armor developed by the Neo Zeon Newtype Research Labs, and for its time, it was one of the largest and most powerful mobile weapons ever developed. It is the direct descendant of the AMX-002 Neue Ziel fielded during the Delaz conflict and can be said to be the culmination of Zeon's Newtype-use technologies. Because of its large size, the α Azieru cannot be stored in regular vessels and must be towed during transportation. Its cockpit is located in the head and features a control interface similar to that of the MSN-04 Sazabi and MSN-03 Jagd Doga. One of its strongest weapons is the mega particle gun which can destroy several mobile suits with one blow, and α Azieru is equipped with two such guns, one in the head and another in the chest. Because it was developed as a Newtype weapon, the α Azieru has 9 funnels which can attack over great distances. For close combat, it is equipped with two folding claw arms, a pair of 5-barrel wire-guided psycommu mega arm cannons, and 6 vulcan guns mounted in the head.

The NZ-333 α Azieru mounts 4 vulcan guns on the sides of its head. Vulcan guns are typically small-caliber weapons that do not have the power to heavily damage the armor of a mobile suit, though it is possible to deal light damage. However, they have a high rate of fire and serve as mid-to-short range defensive weapons for shooting down small, lightly armored targets such as missiles or remote weapons, and to restrict an approaching enemy mobile suit's movements.

The NZ-333 α Azieru has an additional pair of vulcan guns located in the forehead, and they are larger than those on the sides of the head. The large vulcan guns are capable of firing 6000 rounds in a minute.

A pair of arms used for melee combat, they are typically retracted within the shoulder armor when not in use.

A powerful weapon in the α Azieru's arsenal is a mega particle gun installed in the head where the unit's "mouth" would be. With a power rating of 19.5 MW, the beam unleashed from the mega particle gun can destroy multiple mobile suits in one shot.

A second mega particle gun that is located in the chest of the α Azieru, its power rating is unknown.

Mounted at the ends of the α Azieru's shoulder armor are two wire-guided mega arm cannon units. Each unit is armed with 5-barrel beam cannons, with each cannon having a power rating of 12.6 MW. When launched, the mega arm cannons allow the α Azieru to attack a target from multiple angles simultaneously, making dodging very difficult. Although they are also controlled by the Psycommu system like the large funnels, they however lack the range of the funnels and are used more as mid-to-short range weapons.

The most dangerous weapons of the α Azieru are the 9 funnels stored in recharge racks on the rear skirt armor. They are equipped with built-in generators. Guided by the psycommu system, these remote weapons are capable of conducting all range attacks from great distances without the need for guiding wires and without interference from Minovsky particles. With their all range attack, the α Azieru can attack multiple opponents from multiple angles, an attack that will destroy all but the most skilled pilots in the most advanced machines. They are also ideal for attacking nuclear missiles as their great operation range allows the α Azieru to destroy a nuclear missile outside of the explosion radius. The power rating of each funnel's beam gun is 20.4 MW. However, this is compressed into a smaller beam so it has higher penetrative damage, but does less overall damage than the mega particle gun.

A Psycommu is a device connected directly into the user's thoughts, through which the user can manipulate it by using his/her mind. The name derives from psychic and communicator. In essence, a psycommu system works by passively scanning the brainwaves of Newtypes, amplifying them in order to send the brainwave signal out long distances, and then translating these brainwaves into raw machine codes upon being received by the selected object. Since brainwaves are not affected by the radio interference property of Minovsky particles, at first it was mainly used to mentally control remote weapons, usually mounted with a single beam gun. This enabled the resurrection of BVR engagements, with bits and funnels being the first weapons able to engage targets without visual contact since the development of the Minovsky particle. Later on, the psycommu system was also used to increase response times.

In order to increase the α Azieru's operational fight period, it is equipped with a pair of detachable sturm thrusters that are positioned and sized in such a way that they could be mistaken for legs, however they are completely stationary. The sturm thrusters are basically massive external propellant tanks with rocket engines at the bottom, and can be ejected once the fuel has been used up.

The head of the α Azieru, which is where the cockpit is located, can detach from the main body and fly under its own power. This allows it to be used as an escape pod in the event that the body of the α Azieru is too damaged to continue operation or is otherwise in danger of being destroyed.

The α Azieru entered combat on March 12, 0093 U.C., piloted by Newtype Quess Paraya. Under guidance of cyber-Newtype Gyunei Guss, Quess fought against the Londo Bell forces and destroyed many of them. It also fought against ace pilot Amuro Ray in his RX-93 ν Gundam. Amuro destroyed some of α Azieru's funnels and inflicted some damage to the head area. Its last battle cames against the RGZ-91 Re-GZ piloted by Chan Agi. During the fight, Chan fired a grenade directly at the α Azieru's cockpit, destroying the mobile armor and killing Quess.

The α Azieru was assigned to Quess soon after she joined Neo Zeon. It was first deployed in the operation to suppress Luna II in which she killed her father Adenaur Paraya with the funnels. It was later deployed in the defense of Axis on March 12, 0093 U.C., where it fought against ace pilot Amuro Ray in his RX-93-ν2 Hi-ν Gundam. Amuro got away from the mobile armor's attacks to duel with Char Aznable. When the mentally unstable Quess intercepted Amuro and Char, the α Azieru was shot in the cockpit and taken down by a Jegan piloted by Hathaway Noa, who was trying to stop her.

The α Azieru appears in the fifth episode of Gundam Evolve where it fought against Amuro but this time there is a happy end for her. This short clip also shows that the mobile armor can detach its head, which also contains the cockpit, and use it as some kind of shuttle.

After the Second Neo Zeon War, α Azieru's remains were recovered by Buch Concern. Its psycommu technology was reverse-engineered and combined with data from Den'an-type mobile suits to spawn the mobile armor XMA-02 Ebirhu Doga.

A custom α Azieru with a distinctive purple and red color scheme. The Gunpla was built and piloted by Carlos Kaiser in Gundam Build Fighters. It is never actually seen in combat prior to its crushing defeat at the hands of Aila Jyrkiäinen's Qubeley Papillon. 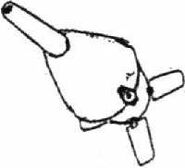 Lineart for the Gundam Evolve version 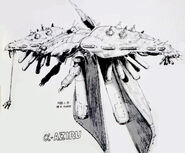 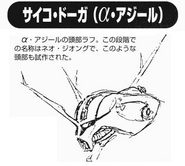 Early Design of the head of Psyco Doga/α Azieru. At the time, the name was supposed to be Neo Zeong 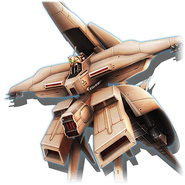 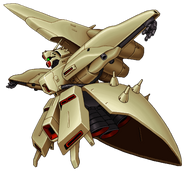 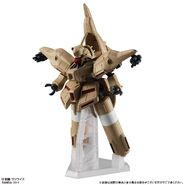 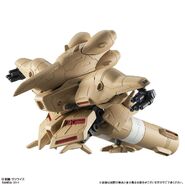