The NZ-222 Psyco Doga is a mobile suit from the Char's Counterattack Mobile Suit Variations series. It is the prototype of the NZ-333 α Azieru.

The Psyco Doga is only armed with six funnels and two wired psycommu mega arms, each mounting a single beam gun. Different from the Alpha Azieru, the Psyco Doga is equipped with an I-field barrier generator, providing better protection against beam weapon fire.

Built parallel to the MSN-03 Jagd Doga, the Psyco Doga was built by Char Aznable's Neo Zeon movement and served as a prototype for the later Alpha Azieru. The Psyco Doga is much smaller than the α Azieru but because the size of the Psycommu system isn’t reduced in time, the body is enlarged to that of a mobile armor. 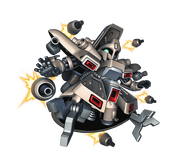 Retrieved from "https://gundam.fandom.com/wiki/NZ-222_Psyco_Doga?oldid=451123"
Community content is available under CC-BY-SA unless otherwise noted.