The NZ-000 Queen Mansa (aka Quin Mantha) is a mobile suit from Mobile Suit Gundam ZZ. It is piloted by Ple Two and Glemy Toto.

Following the Gryps Conflict, Neo Zeon (formerly Axis Zeon) began developing new mobile suits using the most advanced technologies that surpassed those of the AEUG and Earth Federation in nearly every way. The grand, final product was the Queen Mansa. In addition to a highly powerful fusion reactor, possessing an output multiple times greater than an average mobile suit's, it also sports a massive arsenal of beam weaponry, which included two Large Beam Sabers, six Mega Particle Guns, a 3-barrel Mega Particle Gun and 30 Funnels. Its shoulder binders contain Mega Particle Deflectors that not only shield the mobile suit from incoming beam fire, but also redirects the beam for offense. As with the AMX-004-3 Qubeley Mk-II, the Queen Mansa could be externally controlled by a Newtype pilot using a psycommu controller headset. The cockpit is housed inside the head, which could detach from the mobile suit to serve as an escape unit.

A beam gun mounted in the forehead, it has a power rating of 13.6 MW. When the Queen Mansa's head separates from the rest of the body, it can use this weapon to defend itself while escaping.

A set of 30 remote-controlled weaponry known as Funnels are stored in a container mounted on Queen Mansa's back. The Queen Mansa's funnels are of the same type as those used by the AMX-004 Qubeley, and have an output of 1.3 MW each. They are powered by a built-in energy capacitor and have to return to the mobile suit for recharging after operating for a certain amount of time. The funnels are used to attack the enemy unit from multiple directions at once, essentially creating a cage of beams that is impossible to dodge except for the most agile of mobile suits and the most skilled of pilots.

The unit's head can detach from the body.

Like the I-Field generator, the Mega Particle Deflector is designed for defending against beam attacks. One is located in each shoulder binder.

The psycommu (psyco-communicator) system is a mind-machine interface for Newtypes first developed by the researchers of the Flanagan Institute during the One Year War. Newtypes can emit powerful thought waves - similar to regular brainwaves, but not electrical in nature - called psycowaves, and this interface system was designed to receives these thought waves and translates them into computer commands. Using this interface, a Newtype pilot can direct remote-controlled weapons, and operate huge mobile armors, by thought alone. The Principality of Zeon forces based at the asteroid Axis succeed in miniaturizing the psycommu system, so that it can be installed in regular-sized mobile suits like the AMX-004 Qubeley.

The only unit fielded was first piloted by Glemy Toto's mind-controlled Cyber-Newtype Ple Two, the clone of the Newtype pilot Elpeo Ple, at the very end of the First Neo Zeon War. Originally slated against Haman Karn's Neo-Zeon faction, it was redeployed against the AEUG's "Gundam Team", which overcame the mobile suit by wiping out both Glemy Toto and the Queen Mansa's head as he chased after Ple Two, who fled from the exposed cockpit before its destruction.[1]

The wreckage of the Queen Mansa was repaired by Glemy Faction Remnants in U.C. 0090. Its new pilot was Annerose Rosenheim, a survivor of the Marchosias unit which fought in the One Year War. Upon encountering Chloe Croce's AMX-018［HADES］ Todesritter, Vincent Gleissner's AMS-119 Geara Doga and Travis Kirkland in his MSZ-008 ZII, Annerose started to attack them, blaming Vincent, former captain of the Marchosias unit, and Chloe, former pilot of the RX-80PR Pale Rider, for the death of Albert Bell along with most of the Marchosias unit during the battle of A Baoa Qu. The battle ended with the mutual destruction of the Queen Mansa and the Todesritter. Chloe and Annerose, who finally came to terms with their pasts, both ejected and were rescued by Vincent and Travis. 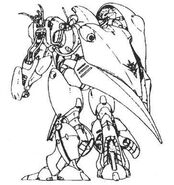 Rear close up, without left shoulder binder and funnel container 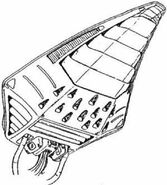 Appearing from the large MS deck of the Gwanzan 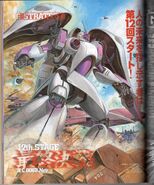 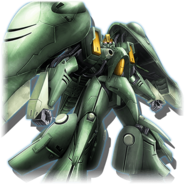 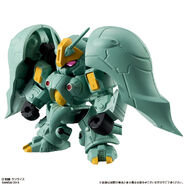