The NRX-044 Prototype Asshimar TR-3 [Kehaar] is a variant of the original NRX-044 Asshimar, which appears in the Advance of Zeta: The Flag of Titans photonovel. The Kehaar is named after the character Kehaar (a fictional character from Watership Down).

Following the introduction of the NRX-044(R) Prototype Asshimar TR-3 [Kehaar] Space Type, the Titans further developed the Kehaar into the NRX-044 Prototype Asshimar TR-3 [Kehaar], remodeled for atmospheric use after the completion of its space testing, and new tests were conducted to evaluate the durability of its transformation mechanisms under gravity. Thermonuclear engines were installed in the leg sections which serve as the Kehaar's main propulsion devices, giving it far greater thrust than the later production model. It was also equipped with a skirt unit containing supplemental thrusters for vertical takeoff. Since this unit included fixed wings for stabilizing the machine's flight attitude, its silhouette in mobile armor form was very different from that of the production model. A beam gun similar to MS-09B Dom was installed in the left side of the Kehaar's chest, and its beam rifle can double as a beam axe. Also adapted from the Dom was its head which sported a cross design for its sensor array, however, unlike the Dom, it sported three "eyes" instead of just one. 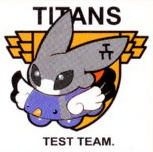