The NRX-044 Asshimar is a transformable mobile armor introduced in Mobile Suit Zeta Gundam. It was most notably piloted by Buran Blutarch.

Initially developed as an experimental transformable mobile armor at the Oakland Research Institute, the Asshimar was introduced before the Gryps Conflict and was used extensively by the Earth Federation Forces. It was the first mobile weapon to be able to fly in the Earth atmosphere on its own power without the help of a sub-flight system. Asshimar's development was initiated by the Earth Federation Forces as the NRX-044[R] Prototype Asshimar TR-3 [Kehaar] and later continued in form of the NRX-044 Prototype Asshimar TR-3 [Kehaar].

Asshimar's design featured additional sub mono-eye sensors along with the main camera sensor. Because its range was restricted to within the Earth atmosphere, a thermonuclear jet engine is used as its main propulsion system. This system uses air for propellant, making it fuel-efficient while effectively giving the Asshimar an enhanced cruising capacity. The engine air intakes are located in the upper thighs of the leg units, which are mainly closed by shutters in its mobile suit mode. In addition, its mobile armor mode possesses excellent aerodynamics as a lifting body, allowing for long-haul flights. The head unit is equipped with a multiple antennas with differential pressure sensors. Its landing gear, which is provided in the chest armor and leg units, is used in conjunction with underside fuselage nozzles for hovering during take-off.

While not as powerful as its prototype, the production model of the Asshimar was a formidable machine. With magnet coating technology being applied to its transformation system, the Asshimar was able to transform between its MS and MA modes in only 0.5 seconds. Also, it sported thick armor and was able to withstand most standard mobile suit firearms. However, the chest frame is left vulnerable to attack during transformation. The Asshimar was limited to fielding its custom large beam rifle which was mounted on the main body in MA mode, limiting its usefulness. Nevertheless the Asshimar proved to be a powerful, versatile, and deadly unit and was stationed on various Federation bases on Earth.

In the manga Mobile Suit Zeta Gundam Define, it was redesigned by Kyoshi Takigawa. New features include an increase in height, folding wings on the legs, retractable twin machine guns in both forearms, and built-in missile racks on both shoulders. In addition, the large beam rifle was now stored on the side in MA mode (allowing two to be mounted), and mounted on the forearm in MS mode when not in use.

A custom-built beam rifle with a long vertical rectangle muzzle, it was designed with aerodynamics in mind. It is stored under the fuselage in MA mode or at the back of waist armor in MS mode when not in use. It has an output of 2.6 MW, and its high destructive power was due to greater beam convergence rate. The Large Beam Rifle was able to fire beam shots in single mode and in burst mode.

The standard close range armament for most mobile suits, it is a small device held in the hands when operated and is powered by a rechargeable energy capacitor. The beam saber emits a blade of plasma contained by an I-Field and can cut through most armor not treated with anti-beam coating.

Developed in the early part of the Gryps Conflict, the NRX-044 Asshimar's first known sortie was a single unit piloted by Buran Blutarch attacking the Karaba-held Kennedy spaceport alongside regular EFF's RMS-106 Hizacks riding on Base Jabbers subflight crafts. The Asshimar proved very capable, easily out-maneuvering the AEUG's advanced MS such as RX-178 Gundam Mk-II and MSN-00100 Hyaku Shiki. Though the Asshimar would be damaged and forced to retreat, both Karaba and the AEUG suffered heavy losses. Blutarch continued using his Asshimar in pursuit of the Karaba's Garuda-class, launching from his own Garuda. The Asshimar was destroyed on one of these missions, killing Blutarch. One captured unit was used by AEUG's ace pilot Gabriel Zola to attack the Kamchatka base.

In U.C. 0088, during the First Neo Zeon War, several Asshimars were stationed at Earth Federation bases captured by Neo Zeon forces. This gave the Neo Zeon forces access to the machine. The Asshimar was still used by the Earth Federation in U.C. 0090. Several units served as part of the Mobile Suit Air Force Company, one of which was piloted by company leader Broglie Ligera. Three of these Asshimars were used to reinforce a supply base under attack from raiders using mobile suits. Broglie would duel a blue Gelgoog that he seems to recognize as being piloted by Uma Lightning. By U.C. 0096, Asshimar was succeeded by the RAS-96 Anksha. 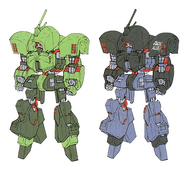 Being shot through by the RX-160 Byarlant

An Asshimar (top left) as part of the Glemy Faction

MA Mode as featured in MSV-R: The Return of Johnny Ridden 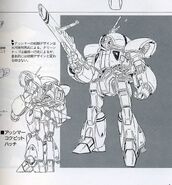 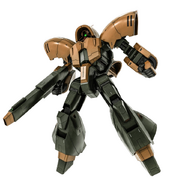 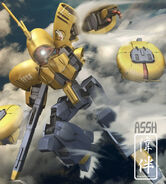