The NRX-044(R) Prototype Asshimar TR-3 [Kehaar] Space Type is a variant of the original NRX-044 Asshimar, which appears in the Advance of Zeta: The Flag of Titans photonovel. The Kehaar is named after the character Kehaar (a fictional rabbit character from Watership Down).

The NRX-044(R) Prototype Asshimar TR-3 [Kehaar] was a transformable mobile armor derived from the NRX-044 Asshimar, the first mobile suit to be able to transform from mobile armor to mobile suit during battle. Due to the high stress placed on the transformation systems under gravity, a prototype machine was initially made for testing in zero gravity where the load was reduced. The construction of the Kehaar's frame is very complex and can be considered an early movable frame.

Because it is still a prototype, the mobile suit isn't adequately armored, and the frame of the arm and leg joint sections is exposed. The Kehaar is equipped with three large propellant tanks with built-in thrusters, similar to sturm boosters. Its thighs contain the same supplemental generators installed in the rest of the TR series. Its skirt armor contains a pair of sub arms which served as landing gear, while the shields attached to its arms functioned as stabilizers in mobile armor form. Its beam rifle could draw energy from either the Kehaar itself, or from its two attached energy packs. The Kehaar carried four extra energy pack holders, two on each of the propellant tanks attached in place of its legs.

The Titans further developed the Kehaar into the NRX-044 Prototype Asshimar TR-3 [Kehaar]. 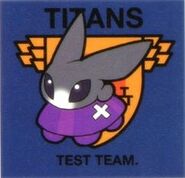 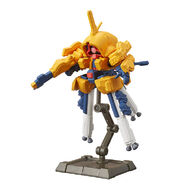