The NRX-033 Matabiri (マタ・ビリ) is a large mobile fortress featured in Advance of Zeta: The Traitor to Destiny.

The Matabiri has highly durable Luna Titanium armor than can withstand light projectile such as machine gun without damage, and also has built-in I-Field generator that can deflect beam projectile. It's also capable of flight using its Minovsky craft system. Its main armament is the large mega particle cannon, not unlike one used by the Big Zam. Unlike Big Zam, Matabiri also has effective coolant system that allow it to operate for long period without overheat. 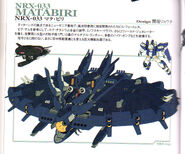 Retrieved from "https://gundam.fandom.com/wiki/NRX-033_Matabiri?oldid=349169"
Community content is available under CC-BY-SA unless otherwise noted.