The NRX-018-2 Daughtress Neo is a Mobile Suit in the series After War Gundam X.

Developed over a decade after its parent model, the DT-6800A Daughtress, it is reasonable to assume that the Daughtress Neo has a significant increase in performance to correspond with the advancement of technology. The Daughtess Neo was capable of flight within atmosphere. The only weapon mounted on the Daughtress Neo are two beam saber-like beam cutters, with one unit mounted on each forearm. These cutters also double as wired beam rifles, giving the Daughtress Neo both close and ranged combat abilities. Besides this, the suit is also able to use a handheld beam rifle.

Multiple Daughtress Neo were fielded on Earth mostly in aerial battles, often working together with the Gundams of the Frost brothers to fight against the Gundams of the Vulture group of Jamil Neate.[1] When the 8th Space War began between the New UNE and the Space Revolutionary Army, a huge number of Daughtress Neos were among the mobile suits deployed by the New UNE's space fleet.[2] 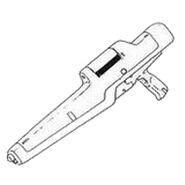 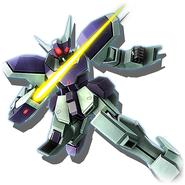