The NRX-016 Rasveht is a prototype Newtype-use mobile suit featured in the series After War Gundam X. It is piloted by Abel Bauer.

Developed by the New United Nations Earth (New UNE) staff headquarters in A.W. 0015, the NRX-016 Rasveht is designed for Newtype-use. It is equipped with the Flash System which allows a Newtype pilot to control multiple Bit Mobile Suits, and is the first New UNE prototype mobile suit to successfully do so. The Rasveht's Bit Mobile Suits were known as "Bit Rasvehts"; these Bit Rasvehts are identical to the piloted Rasveht unit in appearance, performance, and weaponry. Thus, not only can the Rasveht overwhelm its opponents with coordinated attacks from the Bit Rasvehts, but the opponent also had a hard time identifying the piloted Rasveht during combat. The Rasveht and its Bit Rasvehts are each armed with a beam rifle for ranged combat and a beam saber for close quarters combat.

The Rasveht's primary ranged weapon, the beam rifle fires particle beams capable of penetrating through most materials that have not been treated with proper counter-measures.

The beam saber is the standard close-combat weapon for a lot of mobile suits. It generates a blade-shaped beam to melt and cut through enemy's armor. The beam saber is stored on the Rasveht's main body.

Installed in the Rasveht's head, the Flash System is a Newtype-use system. The system's functions differ from mobile suit to mobile suit, but the most common use is to allow a Newtype pilot to control multiple unmanned Bit Mobile Suits to attack and overwhelm enemies.

Under the orders of the Frost Brothers, the Rasveht is piloted by Abel Bauer, a potential Newtype working for New UNE. Abel deployed alongside Olba Frost and Shagia Frost in their respective Gundam-type mobile suits from a transport plane to engage the mobile suit team of the Vulture ship Freeden. During the battle against the GX-9901-DX Gundam Double X and GW-9800-B Gundam Airmaster Burst, the Frost brothers abandoned Abel claiming that their Gundams had a system malfunction. Abel refused to show his back to the two young pilots of Freeden Garrod Ran and Witz Sou, and continued to battle the two.

Abel's stubbornness almost led to his death in the continued battle as Garrod and Witz gained the upper hand. However, by fearing death in the heat of battle, Abel awakened his Newtype powers and activates the Bit Rasveht that were held within the transport plane. With his new found powers, Abel overwhelms Garrod and Witz with synchronized attacks with his Bit Mobile Suits. Seeing that Garrod and Witz were being overwhelmed, Jamil Neate deployed in the GX-9900-DV Gundam X Divider to aid the two. Jamil orders Garrod and Witz to spread out in an attempt to confuse Abel, this managed to force Abel to change his tactics and attack the Freeden. Garrod then take a risky move and bait Abel to focus his attacks on the Double X. The Freeden mobile suit team is able to damage one of the Rashvehts with Garrod's tactic, however Jamil was still unable to figure out which Rasveht was piloted. 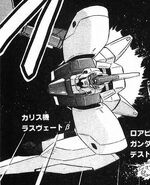