The NRX-011 Britova is a Mobile Suit which appears in the series After War Gundam X.

The Britova is a custom close range machine converted from a rear support mobile suit. Piloted by Duett Langraph, its main weapon is a rocket-guided, heat wire in the right forearm that is able to cut a mobile suit into pieces easily and thus a dangerous close combat weapon. The machine's only other weapon is a pair of shoulder-mounted launchers for firing micro-missiles.

Installed on the right forearm is a heated, mono-filament wire cutter, designed to cut through enemies with ease.

Another experimental mobile suit created by the New United Nations Earth, the Britova was assigned to UNE pilot Duett Langraph, who was then put under command of the Frost brothers. He impresses them by destroying a Daughtress with ease and they order him to destroy the GX-9901-DX Gundam Double X of the Vulture ship Freeden.

Langraph later attacks both the Gundam Double X and the GW-9800-B Gundam Airmaster Burst who moved out the help some soldiers of the People's Republic of Estard in their battle against the New UNE. The battle takes place in a forest where Langraph first uses the Britova's micro-missiles to block the path of the two Gundam and then attacks them with the heat wire. He uses it to destroy the Double X' beam rifle while at the same time cuts down many trees. The battle then continues in the air, where Langraph is able to cut off the Airmaster Burst's right arm, while keeping the Gundams away from him with the micro-missiles.

Garrod then tells Witz to distract Langraph while he at the same time plans to destroy the rocket which guides the heat wire. The plan works and with Langraph shocked at the loss of his main weapon, Witz fires at the Britova's torso, causing the suit to crash on the ground and explode. 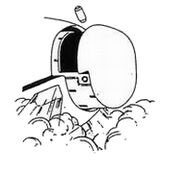 Heat Wire in use