The NRX-007 Correl is a prototype high mobility close quarters combat mobile suit featured in the series After War Gundam X, and is piloted by Demar Griffe.

The NRX-007 Correl is a prototype mobile suit developed by New United Nations Earth (New UNE) staff headquarters. It is created with high agility and mobility in mind. To achieve maximum agility and mobility, the Correl lacked any excess weight. Furthermore, the Correl sacrifices armor and armaments to reduce the mobile suit's overall weight for unmatched speed in close quarters combat. The Correl's only weapon is a beam knife. The Correl displayed nearly peerless agility among mobile suits due to its light weight, furthermore it can stand on buildings without collapsing them. However, the Correl's major flaw is its weak armor, causing it to be vulnerable to even weapons of low firepower.

Developed by the New United Nations Earth (New UNE) staff headquarters in A.W. 0015, the prototype mobile suit NRX-007 Correl was assigned to Shagia Frost and Olba Frost to destroy the GX-9901-DX Gundam Double X of the Vulture ship Freeden. The two handed the suit to Demar Griffe, a ace pilot known as the "White Reaper of the African Front." The Frost brothers were assigned to evaluate if Demar could become a Newtype for the New UNE forces. When Demar saw the unit, he instantly demanded the originally red and grey-tinted Correl to be painted in perfect white before he piloted it.

When the New UNE forces initiated Operation Sacrifice and attacked the United Kingdom of Northerbell's capital, Demar moved out to destroy the Double X and its pilot Garrod Ran. While the Correl and Demar were being transported to the battlefield of Northerbell's capital, the two Frost brothers were notified of the Double X's presence. Demar then requested the Frost brothers to set up a one on one duel with the Double X. Shagia launched in his NRX-0013 Gundam Virsago and lured the Double X to the enclosed town square of the capital city. Demar then ambushed the Double X and engaged it in close quarters combat. With Correl's peerless agility and mobility, Demar easily sliced off the Double X's left arm and landed multiple slashes on its body. However, the tables turned when Garrod blocked the Correl's beam knife with the Double X's beam rifle, and the explosion from the damaged rifle pushed back the Correl and stunned Demar. Taking advantage of the situation, Garrod quickly unleashed a barrage on the lightly armored Correl with the Double X's head vulcans and breast launchers, destroying it. 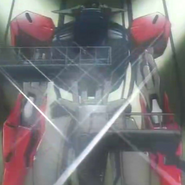 Original colors in hangar close up