The NRX-0015-HC Gundam Ashtaron Hermit Crab is a transformable Mobile Suit introduced in the second half of the After War Gundam X anime and is piloted by Olba Frost.

To enable space combat, the NRX-0015 Gundam Ashtaron was upgraded into the NRX-0015-HC Gundam Ashtaron Hermit Crab. Besides featuring new, larger backpack and leg units, the Gundam Ashtaron Hermit Crab also has improved propulsion system for higher mobility. When transformed into its Mobile Armor (MA) Mode, the mobile suit's defensive capability is enhanced as most of its body, except for its legs, are enveloped by the large backpack. The MA mode also has higher flight speed, matching that of the GS-9900 G-Falcon in space and on Earth.

The Gundam Ashtaron Hermit Crab is armed with a beam saber and two machine cannons like its predecessor, but the atomic scissors have been replaced by the larger and more destructive gigantic scissors, which also have a built-in beam cannon each. Additionally, the mobile suit later gained the powerful Satellite Launcher, which has firepower comparable to the GX-9901-DX Gundam Double X's Twin Satellite Cannons. Usable only in MA mode, the launcher is mounted atop and requires the NRX-0013-CB Gundam Virsago Chest Break to operate it as some of the equipment for firing the weapon is installed in this other Gundam.

An enlarged, improved version of the original Ashtaron's Atomic Scissors, a pair of them are installed in the backpack. With the increase in size, the Gigantic Scissors also has greater crushing power, as shown when it easily crush apart the SRA's heavily armored RMS-019 Crouda. The weapon is also known as "Improved Type Atomic Scissors".

A beam cannon mounted in each Gigantic Scissors, in between the pincers.

Like the original Ashtaron, the Ashtaron Hermit Crab is equipped with a Beam Saber. Usable only in MS mode, this close combat weapon is handheld when deployed and generates a blade-shaped beam to melt and cut through enemy's armor. It can be used in conjunction with the Gigantic Scissors to gain an advantage in close combat.

Like the original Ashtaron, the Ashtaron Hermit Crab is armed with two Machine Cannons on its shoulders. Usable only in MS mode.

Mounted atop the Ashtaron Hermit Crab's MA mode, this weapon is a later addition. It is the same type of weapon as the GX-9900 Gundam X's Satellite Cannon and must be charged with the super-microwave energy beam emitted from the lunar base. However, its firepower is higher and comparable to the GX-9901-DX Gundam Double X's Twin Satellite Cannon. The Satellite Launcher extend outwards when deployed and its barrel also lengthened, but the Ashtaron Hermit Crab is unable to use this weapon by itself. The NRX-0013-CB Gundam Virsago Chest Break must be present to fire this weapon as it is equipped with the receiver and energy storage devices for the super-microwave energy beam.

Following the theft of the newly built GX-9901-DX Gundam Double X at Zonder Epta, as well as the impending start of a new war between the New United Nations Earth and the Space Revolutionary Army, the Gundams of the Frost brothers were upgraded into newer and more powerful versions. The Gundam Ashtaron Hermit Crab appeared in space when the Frost brothers and a large team of the New UNE attacked Garrod Ran, Tiffa Adill and Pala Sys to capture them. During the battle, Olba was able to capture the GS-9900 G-Falcon and threatened to kill its pilot, Pala, forcing Garrod to surrender.[1]

The three prisoners however soon escape but were chased by the Frost brothers in their Gundams, together with a squadron of NRX-018-2 Daughtress Neo. During the battle, Garrod and his Double X was nearly defeated, but luckily his friends from the Freeden helped him and chased away the Frosts.[2] Later, the brothers used their Gundams to destroy a plane carrying a number of senior officers of the New UNE, who were pushing for peace with the colonies, clearing the way for the war the brothers want.

The 8th Space War soon broke out, during which the Frost brothers in their Gundams fought against the SRA forces in space, with both sides planning to capture the lunar base on the moon. During the battle, the brothers engaged SRA ace pilot Lancerow Dawell in his RMS-019R Crouda Lancerow Custom and nearly killed him, when suddenly the Vulture group of Jamil Neate arrived and intervened. This led to another battle between the Gundams of the Frost brothers and Garrod's Gundam Double X, during which the brothers revealed their plans to Garrod. During the battle, Olba was able to grapple the Double X several times with his mobile suit, but Garrod escaped every time.[3]

As the various leaders involved in the war were led to the moon by D.O.M.E. and the FX-9900-D G-Bit D.O.M.E. units, the Frost brothers fended off these Bit Mobile Suits and deployed a team to the moon to take control of the Satellite System's microwave energy beam facility. The Frost's Gundams then deployed the Satellite Launcher and when the ships of the leaders of the New UNE and SRA appear from the lunar base, the brothers destroy them. Before they were able to fire the Satellite Launcher on the two fighting armies, Garrod attacked them. After a short battle, the Frost brothers activated and aimed the Satellite Launcher at Garrod. As the weapon was being charged by the microwave beam from the moon, Garrod activated the Double X's Twin Satellite Cannon, causing the microwave beam to shift away from the Frost brothers' Gundams to Garrod's. Both parties then fired at each other, causing a large explosion that not only destroyed the lunar base but also all three Gundams.[4]

Slicing a Crouda with Gigantic Scissors

A Crouda sliced apart by the Gigantic Scissors

A draft of proposed power-up version of Gundam Ashtaron 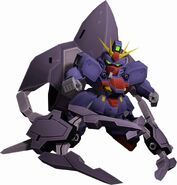 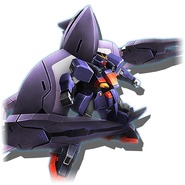 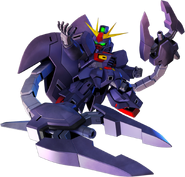 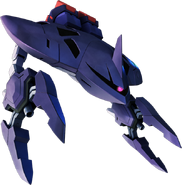