The NRX-0013-CB Gundam Virsago Chest Break is a Gundam-type Mobile Suit which appears in the last arc of the series After War Gundam X.

The upgraded version of the NRX-0013 Gundam Virsago features the same set of weapons as the original version. The only upgraded weapon is the 3-barrel mega-sonic cannon compared to the older 1-barrel version. Its arms has inner frame removed and instead connected via series of tubes, this allow the arms to move with flexibility and range beyond that of the Virsago. The most important upgrade however are the Chest Break's wings, which contain collectors for use with the Satellite System. By standing on top the NRX-0015-HC Gundam Ashtaron Hermit Crab in its mobile armor form, the two Gundams form the Satellite launcher, whose firepower is equal to the Twin Satellite Cannon of the GX-9901-DX Gundam Double X as has been proven in their confrontation above the moon.

An enhanced version over Gundam Virsago's single-barrel version, the 3-barreled cannon is the Virsago Chest Break's most powerful weapon. The weapon is primarily used to inflict heavy damage in a target area, the size of which can be adjusted by the pilot. Because of the weapon's powerful recoil, the Virsago Chest Break must be secured via the strike claws.

The beam saber is the standard close-combat weapon for a lot of mobile suits. It generates a blade-shaped beam to melt and cut through enemy's armor.

A feature carry over from Gundam Virsago, the extended strike claws serve the duel functions as melee weapon to strike at enemy's armor, as well as an anchor to secure Gundam Virsago Chest Break when firing the Mega Sonic Cannon. They are also used to connect with Ashtaron Hermit Crab when firing the Satellite Cannon.

Mounted on the Strike Claws, the claw beam cannons are typically used when the strike claws are deployed.

The theft of the New United Nations Earth' new Gundam Double X as well as the development of new mobile suits caused the outclassed Gundam Virsago to be upgraded into the newer and more powerful Gundam Virsago Chest Break. Piloted again by Shagia Frost, the Chest Break, together with the new Gundam Ashtaron Hermit Crab made its debut in a space battle with Garrod Ran's Gundam Double X as well as Pala Sys' GS-9900 G-Falcon. The battle ends with Garrod's surrender after Olba Frost threatens to kill Pala.[1]

The Chest Break is again used to fight the Double X and the G-Falcon when Garrod, Pala and Tiffa Adill are able to escape but the Frost Brothers are forced to flee when the other Vulture Gundams appear.[2] Later Shagia and Olba use their Gundams to kill several leading New UNE officers so that UNE leader Fixx Bloodman can start a war with the Space Revolutionary Army undisturbed just as the brothers want it to happen.

As the 8th Space War begins, Shagia fights with his Gundam on the side of the New UNE to reach the lunar base which contains D.O.M.E.. During a large space battle the Frost Brothers fight against SRA ace Lancerow Dawell and nearly kill him if not for the Vulture crew. This again leads to a battle against the Vulture Gundams.[3] When Tiffa reaches out to D.O.M.E., his squad of FX-9900-D G-Bit D.O.M.E. units try to bring several people into the moon base but Shagia is able to fend them off. While D.O.M.E. explains his history to the leaders of the two superpowers as well as the Vulture crew, Shagia and Olba are able to destroy all D.O.M.E. Bits and take control of the microwave system. They then combine their Gundams and kill the leaders of both the SRA and New UNE but before they can fire on the fleets the brothers are attacked by Garrod in his Double X. During the battle the Frost Brothers and Garrod fire on each other with their Satellite Cannons which leads to a massive explosion, destroying the lunar station, severely damaging the Gundam Virsago Chest Break and crippling Shagia.[4] 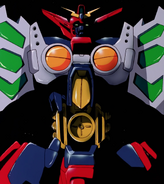 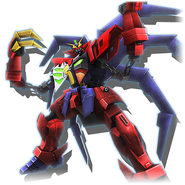 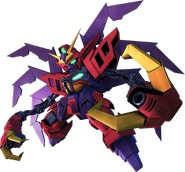 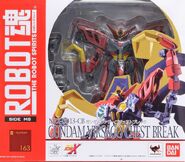