The NMX-004 Qubeley Papillon is a Gunpla appearing in the anime Gundam Build Fighters. Based on the AMX-004 Qubeley, it is built by Nemesis and controlled by Aila Jyrkiäinen.

A Gunpla customized for Aila Jyrkiäinen's use, it was built by Nemesis, a Gunpla Battle team from Finland. The Qubeley Papillon is heavily derived from the AMX-004 Qubeley of Mobile Suit Zeta Gundam and Mobile Suit Gundam ZZ with its overall design and aesthetics overhauled and modified. The signature weapon of the Qubeley Papillon is its invisible funnels, they allow the suit to destroy its enemies without any apparent motion, giving the illusion that simply approaching it causes opponents to explode. Other weapons of the suit includes the normal funnels used by Qubeley, a handheld lancer bit and 2 beam sabers that can also function as beam guns. The Gunpla's performance is improved greatly when the Embody System within Aila's special body suit is set to a higher level. When this occurs, the red markings on the Qubeley Papillon's will glow orange.

A lance with four inbuilt Vulcan guns[1], it can be used as a close combat weapon or as a remote controlled bit.

Stored in Qubeley Papillon's shoulder binders, they are normal funnels made of clear plastic, giving the illusion that the opponents are destroyed by attacks coming from nowhere. The clear funnels become visible if they pass through a smoke-filled area or are coated by substances such as paint; alternatively, a keen eye can detect a slight particle effect in the areas they pass through. To maintain their invisibility, they only attack when in extreme close range of their target. These are the Papillon's signature weapon, and it rarely uses any others unless the clear funnels have been shot down.

Similar to the original Qubeley, the Qubeley Papillon's beam sabers are stored in the forearms and can function as beam guns when in their storage position.

This shield was given to the Qubeley Papillon at random during the Original Weapon Battle. The lower half of the shield is actually a cutting weapon that resembles a hobby nipper, with rockets mounted on the side of each blade for additional power.

History of the Qubeley Papillon can be found on Aila Jyrkiäinen's page. 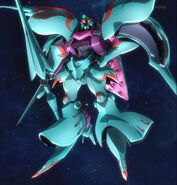 Retrieved from "https://gundam.fandom.com/wiki/NMX-004_Qubeley_Papillon?oldid=407367"
Community content is available under CC-BY-SA unless otherwise noted.