The NMS-X07PO Gel Finieto is a Mobile Suit from the photonovel Mobile Suit Gundam SEED Astray B (Photo-Novel).

The first MS produced by Actaeon Industries, the Gel Finieto's performance is not very outstanding when compared to other MS but it does have an interesting feature - the "Bacillus Weapon System" Binders. These shoulder-mounted binders use Mirage Colloid particles to transmit a computer virus to nearby mobile suits, allowing the hijacking of their quantum computers unimpeded by Neutron Jammer interference. The Gel Finieto's pilot could thus control the infected mobile suits and their systems as he/she wishes and could also erase Gel Finieto from the mobile suits' sensors, rending it "invisible".

The sole equipment of the Gel Finieto, three of them are mounted on each shoulder. They release a quantum computer virus to hijack other nearby MS unimpeded by Neutron Jammer interference. However, attacking the binders will cause the virus' effect to cease and free any suits under its control. An improved version of this virus transmission system is later equipped on ZGMF-X12A Testament Gundam and ZGMF-YX21R Proto-Saviour after they were stolen by EA/The Clan, but the name "Bacillus Weapon System" was apparently discarded.

The Gel Finieto was a prototype mobile suit developed by the defense conglomerate Actaeon Industries, and was used to test the "Bacillus Weapon System", a Quantum Computer Virus Transmission System. However, other than this feature, the Gel Finieto's performance was not much better compared to other existing mobile suits, resulting in little military interest in this machine. Despite this, the mobile suit development know-how that the Actaeon Industries acquired from developing the Gel Infineto proved useful when it worked with the Eurasian Federation to develop mobile suits for the latter's use.

The Gel Finieto eventually falls into the hands of Kenaf Luchini, a freelance informant. Kenaf subsequently lays a trap for Lowe Guele and Gai Murakumo and took control of their MS, forcing them to fight each other. However during the fight, Lowe shuts down MBF-P02 Gundam Astray Red Frame's computer and transfers the control of the MS over to 8, freeing Red Frame from Gel Finieto’s manipulation. Red Frame then slashes at Gel Finieto and caused the virus spreaders to stop functioning, freeing Gai's MBF-P03secondL Gundam Astray Blue Frame Second L from the virus. Gel Finieto is later destroyed by Blue Frame Second L, but Kenaf manages to escape from the MS before the lethal strike hits.

The quantum computer virus transmission technology was later improved and installed on the ZGMF-X12A Testament Gundam and ZGMF-YX21R Proto-Saviour when they landed in the hands of EA/The Clan. 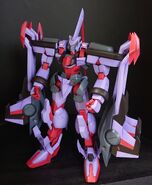