The NK-13J Denial Gundam is a Gunpla from the anime series Gundam Build Fighters Try. It is customized and controlled by Junya Inose.

A gunpla that Junya customized for his own use, it is modified from the NK-13S Gundam Schwarzritter, which itself is a modification of the second Mejin Kawaguchi's NK-13 Cathedral Gundam. Like the TBG-011B Try Burning Gundam, the Denial Gundam is designed for melee combat, allowing Junya to perform the Jigen Haoh School's style of martial arts and other martial arts he learned with ease. Other similarities with Try Burning includes transparent gray parts on the Denial Gundam's shoulder, forearm and knee armor that are capable of storing Plavsky Particles for later emission, and a Burning Burst-like system for maximising particle emission. When the latter system activates, the Plavsky Particles within the transparent gray parts will glow purple, and a particle sash is emitted from the back of the head. During battle, the particle sash can be used to strangle and blind the opponent. The suit is also equipped with a pair of arm-mounted beam swords for close combat.

The Denial Gundam can emit a beam sword from the purple parts on each of the forearms for close combat. The length of the pair of beam swords can be extended when required.

The Denial Gundam is equipped with a particle emission system similar to the Try Burning's Burning Burst System, but it does not involve purging any armor parts. This system is designed to grant the Denial Gundam a temporary power boost via releasing all the stored Plavsky particles within its body. When activated, the Plavsky Particles within the transparent gray parts on the Gunpla's body will glow purple and some of the released particles will form a particle sash that appears from the back of the head.

Hair-like appendages created through the manipulation of Plavsky particles, they are emitted from the back of the head. The particle sash can be used to wrap around the enemy unit, strangling and blinding the opponent.

Like Sekai Kamiki, Junya also practices a style of martial arts known as Jigen Haō-Ryū Kempō (次元覇王流拳法, Jigen Haoh School Martial Arts or Dimensional Overlord's Style Martial Arts?). While piloting the Denial Gundam, Junya demonstrates the power of this martial art. However, this is only one of the martial arts that he knows and he can use it interchangeably with other martial arts like boxing, aikido and baji quan (a Chinese martial arts).

A punch that is capable of stirring up the wind and scattering Plavsky Particles away from the playing field.

A high speed spinning kick executed in mid-air. Furious spinning done by Denial Gundam prior to launching the kick serves to enhance the attack's destructive power, and also creates a twister that is capable of parrying enemy attacks (including missiles and other projectiles).

Performed after the activation of the suit's Burning Burst-like system, it is a copy of Try Burning Gundam's Houou Haoh-Ken but executed differently. The Denial Gundam rotates its head several times and releases a large amount of Plavsky Particles from its hair-like appendages. This creates a powerful fire attack in the form of a purple winged monster that is comparable in power to the Try Burning's.

The Denial Gundam is piloted by Junya Inose, who had tuned the Gunpla to better suit his needs. The base Gunpla was given to him by the school he had entered the tournament with. He then proceeds to fight Sekai and his TBG-011B Try Burning Gundam. The battle seems to start off as an even match as both fighters use the same Jigen Haoh School techniques but Junya quickly shows that though the attack is the same, he has the better technique. The Denial Gundam is then seen easily overpowering the Try Burning with moves and attacks from different martial arts.

Sekai then activates the Burning Burst System, but is shocked to see that the Denial Gundam has a similar system equipped as well. Sekai uses the Houou Haoh-Ken technique that he and the Try Burning created but is shocked, along with everyone else, when Junya is able to easily copy the technique himself. The two Gunpla then charge at each other for a punch which ends with the Try Burning's right arm being damaged. Junya then proceeds to further damage the Try Burning using more martial arts along with its beam blades. As all hope seems lost, Sekai manages to activate the Try Burning's RG Core Unit and the tide of the battle quickly turns as it creates Plavsky Particle projections of itself and uses various Jigen Haoh School techniques on the Denial Gundam. The Denial Gundam is then finally defeated when the Try Burning lays its hand on its chest and delivers a final blast through it.

Denial Gundam on the battlefield 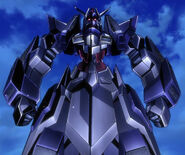 Strangling the Try Burning Gundam with the Particle Sash

Retrieved from "https://gundam.fandom.com/wiki/NK-13J_Denial_Gundam?oldid=471527"
Community content is available under CC-BY-SA unless otherwise noted.