Considered as the brother unit of the Musha Gundam, the Musha Gundam Mk-II is a uniquely designed Mobile Suit covered in Samurai Armor, sporting a pair of giant swords and two horns atop its helmet. Discovered alongside the Musha Gundam on a strange asteroid, the origins of this mobile suit remain shrouded in mystery even today. The unit has the same performance and abilities of the original Musha Gundam, except having different weaponry and attacks.

NOTE: These Armaments were hinted and appeared in Dynasty Warriors Gundam only.

The Shoryumaru gun is a special hand carried Beam Rifle that can fire beam shots to the enemy. Unlike the Musha Gundam's Tanegashima gun, the rifle has a closer resemblance to the RX-78-2 Gundam's Beam Rifle.

It's default sword weapon, stored in the sheath, the Kotetsumaru is used to cut down enemies in one swing. Unlike beam sabers, it doesn't need high amount of energy to use it. Two of these swords were equipped onto the unit.

A Naginata pole weapon, stored on it's back, it's a long spear that is wielded in two hands.

A special device that increases the performance of the unit if it is being operated by a female pilot. 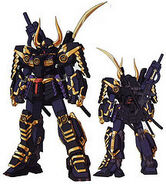 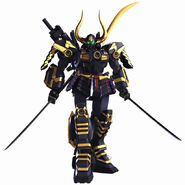 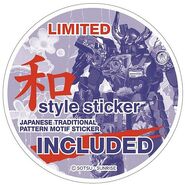 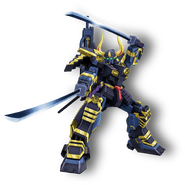 Retrieved from "https://gundam.fandom.com/wiki/Musha_Gundam_Mk-II?oldid=441017"
Community content is available under CC-BY-SA unless otherwise noted.