The Musai-class is a class of light cruiser first featured in the anime Mobile Suit Gundam. It was the first warship designed to carry mobile suits for the Zeon, and several different models were produced during the One Year War.

The main cruiser of the Zeon forces, the Musai was developed on the premise of deploying mobile suits (MS). It has one thermonuclear rocket engine installed at the end of each plate-shaped columns extending to the lower left and right of the bridge, and contrary to the Salamis-class, which retains its angular shape and similarities to naval vessels, the Musai features an original design that makes heavy use of curves. Directly below the bridge is a MS deck that can carry four mobile suits, and it is possible to deliver goods directly by conveyor pipe from the Papua-class supply ship using three supply hatches on each side. The lower part of the bow is equipped with an atmospheric entry capsule "Komusai", and two mobile suits can be stored in it. However, the two mobile suits can be deployed only after the Komusai has separated, as the capsule's storage hatch is blocked when attached to the Musai.

In combat, after fielding its mobile suits, the Musai would engage enemy ships with powerful double-barreled mega particle cannons, weapons that had more than enough punch to penetrate the armor of any of the Earth Federation's warships. Other weapons of the ship include 2 large missile launchers and 10 small missile launchers. Unfortunately, the original Musai-class ships had one major flaw: they lacked any type of anti-aircraft/anti-MS defense systems. While a seemingly unimportant and ignorable issue at first, this flaw would return to haunt the Zeon in the latter half of the One Year War, when the Federation Forces deployed their own mobile suits.

The Musai-class is equipped with three 2-barrel mega particle guns as its primary weapons. Although powerful, their high energy demands meant that it took the generator several minutes to collect the energy for a single shot. Due to their position, these guns are able to aim forward, up and to sides of the ship, but not down.

A large missile launcher is equipped on each side of the Musai-class, below and behind the lowest twin mega particle gun. The large missiles were used for anti-ship/anti-facility attacks.

Each Musai-class had a specialized dock that allowed them to carry a single Komusai shuttle that could be used to carry men, mobile suits, and equipment down to Earth. These Komusai shuttles were often pressed into service as secondary hangars, increasing the number of mobile suits a Musai could carry by two.

To extend operating time, the Musai-class can be fitted with up to two external fuel tanks, each located below the mobile suit hangar.

The Musai-class light cruiser was introduced sometime between U.C. 0075 and U.C. 0079, the time period when Zeon first introduced mobile suits. These light cruiser would quickly replace the more heavily armed Chivvay-class as Zeon's primary warship in space. During the One Year War the Musai would see action in virtually every battle and combat action until Zeon began experimenting with possible replacements such as the Zanzibar-class. During the Battle of Loum, Admiral Dozle commanded the fleet from the heavily modified command cruiser Valkyrie. Char Aznable commanded a modified Musai-class with a helmet-shaped command bridge, named the Falmer.

Towards the end of the One Year War, due to the changing dynamics brought by Federation mobile suits, the Musai had to be reorganized, and the Zeon engineers remodeled the three-turret based cruisers into a two-turret model. This was due to the fact that the Zeon forces were now mostly using the MS-09R Rick Dom. This caused a problem though for the standard Musai model; the Rick Doms were far bulkier, making it impossible to fit three of the units inside the already cramped hangar. By remodeling the hangar and removing one of the Twin Mega Particle Guns, the hangar could hold two Rick Doms, while the Komusai could hold another one. However, the two turret models could also now hold four Zaku IIs. Despite not being able to carry the Rick Doms, the three-turret variant still continued its service until the end of the war at the Battle of A Baoa Qu.

By U.C. 0087, most of the surviving Musai-class cruisers had been upgraded into the Musai Kai-class by the Zeon forces at the mobile asteroid Axis. In the manga "Mobile Suit Gundam U.C. 0096: Last Sun", some original Musai-class cruisers were retained by the remnants of the Principality of Zeon and would see action right up to U.C. 0096.

Musai-class vessels of all variants acquitted themselves well in the One Year War and afterward during Operation Stardust. Examples of the Musai continued to fly in the postwar Republic of Zeon fleet until Zeon rejoined the Earth Federation in U.C. 0099. Afterward, all remaining ships were mothballed in U.C. 0100 and were sold and scrapped after that, with the last ship leaving for the breakers by U.C. 0120. 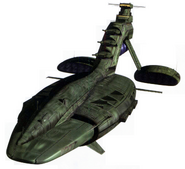 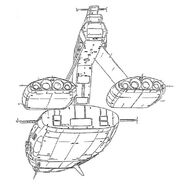 Schematic of the MS IGLOO version.

Musai fleet seen in the intro, with the Falmel at the front (MSG) 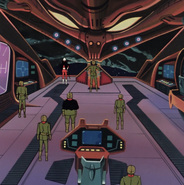 Bridge of the Falmel (MSG)

Deploying a Dom from the lower part of the bow (MSG)