Mulligan is a mild-mannered Principality of Zeon officer. After he joins the Mad Angler squadron, he becomes an aide to Char Aznable and follows him to Jaburo, then to space aboard the Zanzibar. He is killed late in the war when the Zanzibar is sunk by the Earth Federation's White Base. 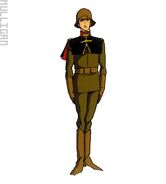 The origin
Add a photo to this gallery

Retrieved from "https://gundam.fandom.com/wiki/Mulligan?oldid=483283"
Community content is available under CC-BY-SA unless otherwise noted.