Although she is very aggressive in combat, she shows great kindness and respect towards her teammates, Sven Cal Bayang and Shams Couza; the latter of which took her death extremely hard. She wears flamboyant makeup and an extremely revealing modified military uniform.

She is particularly good at close-quarter combat. Like Sven and Shams, she has not been given any special enhancements, but she has the skills befitting the elite Phantom Pain.

Like her teammates Sven Cal Bayang and Shams Couza, Mudie is a pilot for Phantom Pain, who underwent training as an anti-Coordinator soldier from childhood. Some time during her life, she had a teacher who was fond of saying that "the only good Coordinator is a dead Coordinator", a phrase which she took to heart, and has quoted herself on two occasions.

The youngest member of her team, Mudie specializes in close-quarters combat, and is assigned to pilot a GAT-X102 Duel Gundam, which would eventually be upgraded into the GAT-X1022 Blu Duel Gundam. In C.E. 73, she and her teammates encountered and engaged in combat against Martian pilot Ergnes Brahe (pilot of the GSF-YAM01 Δ Astray) and his team. Some time later, the three of them were assigned escort duty for the Hannibal-class land battleship Bonaparte, which transported the prototype GFAS-X1 Destroy Gundam. During this engagement, they were engaged by ZAFT forces including TMF/A-802 BuCUEs, one of which severed the Blu Duel's right arm, and another severed its left leg when it attacked it from behind. With her mobile suit down, Mudie was powerless to defend herself when she was attacked simultaneously by three TMF/A-802W2 Kerberos BuCUE Hound which proceeded to maul the Blu Duel, repeatedly impaling its cockpit and killing her. 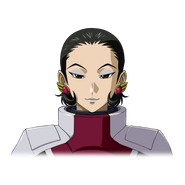