Contrary to a man of his age, Mu has a carefree and boastful spirit. He is lighthearted and friendly, willing to accept Coordinator Kira Yamato into the crew of the Archangel. Mu is casually boastful of his abilities, with his motto being that he can make "the impossible possible". Mu also tends to be somewhat of a ladies' man, being very friendly to the females aboard the Archangel.

When Mu is brainwashed by LOGOS and becomes Neo Roanoke, his personality drastically changes. He becomes more of a leader to his subordinates aboard the Girty Lue. Neo is considered the complete opposite of Mu, willing to break promises (such as promising Stella once he would not wipe her memories) in order to achieve his goals. However, it is interesting to note that Neo talks with the same light hearted manner as Mu and makes similar silly comments. Once Neo defects to Orb, he tends to take more of a supportive role to Athrun and Kira as he tries to regain his memories.

His high spatial awareness allows him to be extremely proficient with employing the remotely controlled gunbarrels of the TS-MA2mod.00 Moebius Zero and the TS-MA4F Exus in combat; he was part of a very small group of pilots capable of handling the Moebius Zero, and the only one of those to survive the Battle of Endymion. He uses these abilities to effectively duel Dearka Elsman's GAT-X103 Buster Gundam even though his Moebius Zero is less powerful and less technologically advanced, and later against Shinn Asuka's ZGMF-X56S Impulse Gundam and Rey Za Burrel's ZGMF-1001/M Blaze ZAKU Phantom as Neo using the TS-MA4F Exus, Moebius Zero's newly created successor. His mobile suit piloting skill is also excellent, and he was able to dispatch the normal grunt units with ease. However, it was only until he received the ORB-01 Akatsuki Gundam, which could be equipped with remote weaponry, was he able to unleash his full potential while piloting a mobile suit.

Mu was born to an aristocratic family. However, his father, Al Da Flaga, believed he was "genetically impure" because of the DNA of his "inferior mother". Seeking a new successor, Al had himself cloned. Both of Mu's parents later died when their home burnt down.

Mu later joined the military and eventually became a veteran mobile armor ace, and a longtime rival of ZAFT officer Rau Le Creuset, with whom he demonstrates a strange extrasensory connection. He is famous in many parts of the Cosmic Era universe as the "Hawk of Endymion" for destroying five ZGMF-1017 GINN mobile suits with his TS-MA2mod.00 Moebius Zero mobile armor at the Battle of Endymion Crater, a feat previously considered impossible. However, Mu knows that this title is nothing more than a formality just to cover up what had happened in the battle.

The Battle of Endymion Crater also leaves him as the only remaining OMNI pilot capable of handling the Moebius Zero, the wire-guided gunbarrels of which require a high degree of spatial awareness not commonly possessed by Naturals.

Lieutenant Mu La Flaga was assigned to escort the five specially-trained Earth Alliance Forces pilots to the colony of Heliopolis, where five G-type mobile suits were in development. However, during ZAFT's attack at the beginning of Gundam SEED, the pilots and the intended captain of the assault ship Archangel are killed and the ship Mu had been assigned to is destroyed. He engages Rau Le Creuset in battle in his Moebius Zero and, when the Zero is damaged, Mu joins the crew of the Archangel. Although he is the most senior surviving Earth Alliance Forces officer, he declines command of the ship and instead encourages Lieutenant Murrue Ramius to take the role of captain, allowing him to continue piloting the Moebius Zero in the Archangel's defense.

While on the Archangel, Mu advises Gundam SEED's young protagonist, Kira Yamato, on the finer points of both mobile suit combat and coping with the stress of a combatant's life. He also provides the benefit of his greater experience to Murrue, contributing a great deal of the strategies employed by the Archangel early in the series, and serving as a pragmatic midpoint between Murrue's idealism and combat commander Natarle Badgiruel's strict reliance on military regulations.

Upon the Archangel's arrival at JOSH-A, Mu is transferred off of the ship and ostensibly assigned a position as a flight instructor in California. However, at the last minute, he chooses to not board his transport and turns back. As a result, he is the first to discover both ZAFT's impending attack and the Cyclops system installed beneath the base; his return to the Archangel to warn its crew, along with Kira's arrival in the ZGMF-X10A Freedom, enables the ship to survive the battle and the detonation of the base.

Rise of the Three Ships Alliance

He remains on board the Archangel following its defection to Orb Union, discontinuing the use of his FX-550 Skygrasper in favor of the rebuilt GAT-X105 Strike Gundam. In the HD Remastered version of Gundam SEED, Flaga pilots the GAT-X105+AQM/E-YM1 Perfect Strike Gundam, a combination of the Strike Gundam and three of its Striker Packs, during his first battle in Orb. However, after this, he abandons it in favor of the separate packs. Shortly before the Battle of Orb, he began an openly romantic relationship with Murrue. Later, during the Battle of Mendel, him and Kira confront Rau Le Creuset at the abandoned Mendel colony and learn of Rau's origins as a clone of Mu's father Al Da Flaga, explaining their extrasensory awareness of one another and the root of Rau's plans to guide humanity into wiping itself out.

Mu is presumed killed at Jachin Due when the Strike is destroyed protecting the Archangel's main bridge from the Dominion's "Lohengrin" positron cannon. However, in the Gundam SEED: Special Edition compilation of the series, the footage of the destroyed Strike was edited so that Mu's helmet no longer appeared amidst the wreckage, retconning his death from definite to assumed in order to allow for his return in sequel series Mobile Suit Gundam SEED Destiny.

Neo Roanoke (ネオ・ロアノーク, Neo Roanōku?) is introduced in Gundam SEED Destiny as a captain in the Earth Alliance Forces 81st Autonomous Mobile Group, commonly known as the Phantom Pain. In this capacity he takes orders from Lord Djibril and is in direct command of the three Extended pilots Sting Oakley, Stella Loussier, and Auel Neider. Neo and his stealth warship, the Girty Lue, engage in repeated battles with the ZAFT battleship Minerva over the course of the series, including interfering in ZAFT's efforts to prevent the Seven colony drop.

Although a ruthless and cunning leader, Neo commands a great deal of trust from his subordinates; he demonstrates some sympathy for the Extended pilots, who are viewed as equipment by most of the Earth Alliance Forces. However, he also manipulates them over the course of the series, and repeatedly breaks promises made to or involving them at orders from Djibril. He allows Stella's memories of being rescued by Shinn Asuka to be erased, after promising her he would not; later in the series he assigns Stella as the pilot of the GFAS-X1 Destroy Gundam after promising Shinn that he would not send her into battle again, and plays on her fears to encourage her to fight, an action which leads to Stella's death at the Battle of Berlin.

Because of the mask he wears, Neo's face is not revealed until late in the series. Initially he pilots a TS-MA4F Exus mobile armor which is very similar in design to Mu's Moebius Zero, albeit more refined. In skirmishes with ZAFT during the Armory One incident, Neo demonstrates an extrasensory awareness of Rey Za Burrel similar to Mu's awareness of Rau Le Creuset; in battles in later episodes, Kira Yamato also displays a degree of similar awareness of Neo. Kira's recognition of Neo prompts him to disable Neo's GAT-04 Windam during the Battle of Berlin; Neo is unmasked in the process, and Murrue Ramius, observing his striking resemblance to Mu, brings him on board the Archangel.

The crew of the Archangel determine that Neo's physical data is a 100% match to their records of Mu. Neo initially denies being Mu or knowing anything about him; however, over the course of the next ten episodes there are several instances in which he demonstrates a degree of unconscious familiarity with the ship, as well as having a knee-jerk emotional reaction to Murrue's presence, resulting in growing confusion about his identity. Ultimately, however, after Murrue releases him from the Archangel and provides him with a FX-550 Skygrasper for transportation, Neo chooses to return to support the Archangel against the Minerva during the Second Battle of Orb, much to Murrue's surprise and delight, in the course of which he repeats Mu's assertion that he can "make the impossible possible" and has a brief flashback of the emergency landing Mu made on the Archangel during the Battle of JOSH-A. Following the battle, Neo confides in Murrue his doubts about his identity, confessing that he's returned because something within him knows about her, and asking to remain on board the Archangel. Murrue consents to his request, and Neo is thereafter commissioned as a captain in Orb's military.

Neo is given the ORB-01 Akatsuki Gundam from Cagalli Yula Athha when the Archangel returns to space and docks at Copernicus City. He goes to Kira, Athrun, Lacus, and Meyrin's rescue, when they run into an attempted assassination on Lacus on a recon mission. However, as he arrives in the Akatsuki, Meer Campbell, is shot dead by her own bodyguard. Neo later regrets for not getting there in time, as he speaks with Murrue about that incident. During the attack on Station One, he uses the Akatsuki to protect the Archangel from the Minerva's Tannhäuser positron cannon in a mirror of the events of the Second Battle of Jachin Due; this time, the Akatsuki's reflective armor enables the Mobile Suit to survive the blast, and in the process, Neo regains his memories as Mu. Speaking to Murrue, he promises never to leave her again. Following the destruction of Station One, the recovered Mu joins Athrun Zala in destroying the Requiem before it can be fired upon Orb.

At the end of Gundam SEED Destiny: Special Edition, Mu and Murrue are seen together at Orb, watching the sunset.

Among the flashback images displayed during Mu's recovery is a single still image of Mu wrapped in bandages with Lord Djibril and a few surgeons next to him, suggesting that following his apparent death at Jachin Due, Mu's severely injured body was recovered and treated by Logos, who then used him for their own purposes. Whether his amnesia is natural or artificial is not confirmed, but Kira does comment that Neo seems to have different memories rather than no memory, indicating that Logos may have employed the memory-altering technology used on the Extended pilots to give Mu his new identity.

The novelization of SEED Destiny elaborates on Mu's fake memories, which, among other things, include joining the army in C.E. 60, a father who died of alcohol poisoning, and being critically wounded during the Second Battle of Jachin Due. 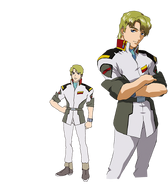 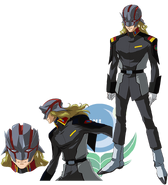 Mu as a child, seeing Rau for the 1st time.

Mu sacrifices himself to protect the Archangel.

Mu recovered by Logos after his apparent death

Neo shocked after Auel has been killed in action 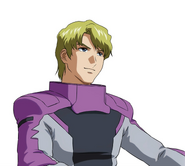 Pilot Suit with Helmet on 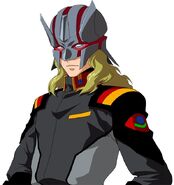 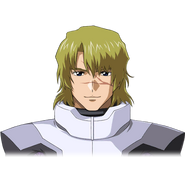 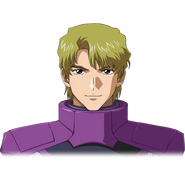 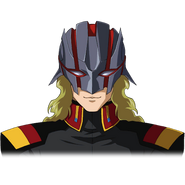 Retrieved from "https://gundam.fandom.com/wiki/Mu_La_Flaga?oldid=461536"
Community content is available under CC-BY-SA unless otherwise noted.