Ms. Tori (ミズ・鳥, Mizu Tori?) is a character that appears in the Gundam Build Divers series. She is a GBN developer, and the creator of GBN's main system.[1][2]

Her GBN avatar is based on the Crystal Phoenix from the SD Sengokuden Densetsu no Daishogun series. She symphathizes with the electronic lifeform Sarah, unlike the administration that only view her as a bug to be erased, and works hard to keep her in the system.[1]

She is confident that her knowledge of GBN's systems and her programming skills surpass that of the administration’s. Has a personal floor within GBN that is not traceable by the administration, including the Game Master.[1] Her avatar can change into a larger form to stop hostile Gunpla.[1]

Ms. Tori (name later provided by Game Master) first appeared in the aftermath of Force Build Divers' victory in the Lotus Challenge, watching over them using her Crystal Phoenix avatar as they discussed what to do with the large reward they received.[3][2] She then followed them secretly on numerous occasions, even appearing before them a few times. Later, she saved Sarah from the GBN-Guard Frame, and revealed herself as a developer and the creator of GBN's main system.

She then took them to her personal floor within GBN, and revealed Sarah's to be an electronic lifeform born in GBN as well as the cause behind the bugs that had been occurring after the Break Decals incident. She had been following the Build Divers to watch over Sarah's growth, and disclosed to them that the administration was working on an update patch to eradicate the bugs, which would also erase Sarah. She wanted to help Sarah, and had carried out various simulations. She thought of transferring Sarah to a different hard disk, but something connected to the servers would still inevitably affect the system. Furthermore, Sarah's personality data could be damaged during the transfer process. Despite her skills, she still could not find a solution. However, she had hopes that Build Divers would find a way to save Sarah.[1]

Soaring in the sky during the Nadeshiko-athlon (Ep 19) 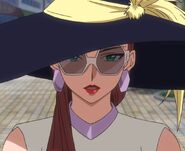